In Memory of
William F.
Grady
1935 - 2022
Click above to light a memorial candle.
Memorial Candle Tribute From
Philbin-Comeau Funeral Home
"We are honored to provide this Book of Memories to the family."
View full message >>>
Send Flowers
Plant a Tree In Memory of Your Loved One
Click Here
Menu 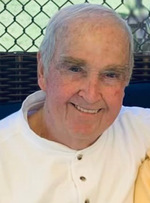 Clinton-William F. Grady, 86, passed away peacefully at home surrounded by family on Saturday, March 19, 2022.  He is survived by his beloved wife of 68 years, Marlene (Roncone) Grady; their children, Kevin F. Grady of Clinton; William S. Grady & partner Robert Nierintz of Clinton; and Kim Cravedi & husband Mike of Sterling; 8 grandchildren, Nicole Lagor & husband Joe, Erin Thompson & husband Matt, Shaun Grady, Kyle Grady & wife Liz, Justin Cravedi and girlfriend Ashley, Sydney Cravedi, Matthew Cravedi, and Makayla Cravedi; 6 great-grandchildren, Ashleigh, Kylie, Tyler, Ava, Emma, and Conor; sister-in-law Marcia Carlson, nieces, nephews, extended family, and many dear friends.  He is pre-deceased by his siblings, Mary Grala, John, James, and Malcolm Grady.
A lifelong Clintonian, Bill was the son of Malachi & Mary (Joyce) Grady.  Affectionately known to his classmates as “Slug”, he graduated from the Clinton High School, Class of 1954 and excelled as a student athlete and co-captain of the Clinton Gaels varsity football team. His successes on the football field continued with studies at the University of Miami. Bill then achieved his undergraduate degree and Master of Education degree from Worcester State College.  A career educator, Mr. Grady held numerous positions in the Clinton Public School system, notably as a teacher, guidance counselor, Director of Special Needs Program, Vice-Principal of the Clinton Middle School, and Director of Guidance.  In addition to his teaching career, Bill worked as a salesman for F.J. Coleman and Co. for many years.  Actively involved in his community, Mr. Grady served on various boards and committees and was instrumental in the development of Clinton & Wachusett Pop Warner football, Cops and Kids, and D.A.R.E. programs.  He was long time member of the Clinton Elks Lodge and served as Chairman of the Council on Aging.  Mr. Grady was celebrated as a Tribute Road Race honoree and was the proud recipient of a Shillelagh Award presented by the Clinton Leprechaun Society.  He will be forever remembered for his quick Irish wit, love of football and service to community.  Bill always put family first and never missed the opportunity to cheer for his grandchildren at their games and events.  He was a loving husband, devoted father, grandfather, great-grandfather, brother, uncle, teacher, and friend.  Calling hours will be held from 4 until 7PM on Thursday, March 24, 2022, in the Philbin-Comeau Funeral Home, 176 Water St., Clinton.  A Mass of Christian Burial will be celebrated at 10AM on Friday, March 25, 2022, at St. John the Evangelist Church, 80 Union St., Clinton, with burial to follow in St. John’s Cemetery, Lancaster.  Memorial contributions may be made in memory of William F. Grady to: Clinton Public Schools-Scholarship & Enrichment Foundation, c/o 43 High St., Clinton, MA 01510.  Online condolences may be placed at www.philbincomeaufh.com