Obituary for Theresa A. McLaughlin (Quill) 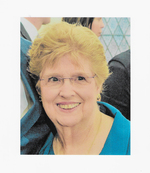 Clinton-Theresa A. (Quill) McLaughlin, 81, passed away peacefully at Sterling Village on Tuesday, April 19, 2022.  She is preceded in death by her beloved husband of 54 years, Daniel J. McLaughlin.  She is survived by her children, Theresa C. McLaughlin of Ware; Mary Beth (McLaughlin) Sekurski and husband Michael Sekurski of Winchendon; Catherine McLaughlin of Wilmington, Delaware; Daniel J. McLaughlin & wife Cathy of Winston-Salem, North Carolina; her beloved grandchildren, Danielle (Sekurski) Detz and husband Kyle Detz of Watertown; and Benjamin Sekurski and companion Jennifer Lusty of Arlington.  She was preceded in death by her siblings Joseph Quill and James Quill.  She leaves behind her sister, Sharon LeBlanc of Westminster; and her sisters-in-law June Quill of Sterling; and Carole McLaughlin of Clinton; numerous nieces, nephews, extended family and dear friends including her wonderful caretaker of the past two years, Maria V. Noj.
Theresa was born in Hamilton, Ontario, Canada, daughter of the late Joseph & Teresa (Morin) Quill.  She was later raised and educated in Clinton, and was a graduate of the Clinton High School, Class of 1958.  In addition to raising her family, Theresa worked as an administrative assistant for Philbin Chevrolet, Clinton Financial, and the Commonwealth of Massachusetts-Division of Capital Planning and Operations, from where she ultimately retired after 23 years.  She was a faithful member of St. John the Guardian of Our Lady Parish in Clinton and held a great devotion to the Divine Mercy.  Actively involved in her community, Theresa was a long-time member and former President of the Clinton Hospital Guild.  She was talented in knitting, crocheting, an avid reader, and accomplished cook. Theresa loved to travel and was happiest in the company of family and friends.  A calling hour will be held from 9:30 until 10:30AM on Monday, April 25, 2022 in the Philbin-Comeau Funeral Home, 176 Water St., Clinton, with a Mass of Christian Burial to follow at 11AM at St. John the Evangelist Church, 80 Union St., Clinton.  Burial will later be held privately in St. John’s Cemetery, Lancaster, MA.  Memorial contributions may be made in memory of Theresa McLaughlin to: Saint Jude’s Children’s Research Hospital, 501 St. Jude Place, Memphis, TN 38105 or at www.StJude.org.   Online condolences may be placed at www.philbincomeaufh.com