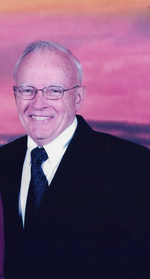 Clinton- Ronald J. Rabideau, 86, passed away peacefully on Monday, December 27, 2021 at the Highlands in Fitchburg, after a long period of declining health. He is survived by his beloved wife of 62 years, Constance (LeCompte) Rabideau; their three children and spouses, Ronald R. Rabideau & Barbara of Camden, NJ; Robert E. Rabideau & Esther of North Reading; Jeannie M. Innamorati & Jeffrey of Clinton; and five grandchildren, Anthony, Rachel, and Gianna Innamorati, Alison and Trevor Rabideau, extended family and many dear friends.  He is pre-deceased by his infant daughter, Janet Elizabeth Rabideau.
Ron was born and raised in Clinton, son of the late Herman & Laura (Castine) Rabideau. He graduated from Clinton High School, Class of 1953, and enlisted to proudly serve our nation in the US Army and Army Reserves.  After his time in the service, he returned home to Clinton, where he and Connie raised their family.  He was a devout Catholic and member of Saint John the Guardian of Our Lady Parish for over 70 years. Ron began his professional career with the Colonial Press in Clinton, where he worked as a folding machine operator for 25 years, until its closing. He then accepted a position with the MDC, and later joined the Massachusetts Water Resources Authority, from where he ultimately retired as Assistant Superintendent of the Clinton Wastewater Treatment Facility.  His spare time was spent completing countless home and garden projects, which brought him great pride and joy. Upon his retirement, summer months were spent at the lake in Ashburnham and the winter months were spent in Englewood, Florida. Ron and Connie enjoyed extensive travel, cruises, and vacations with family and friends.  Ron was happiest in the company of his wife, children, and grandchildren and will be forever remembered as a loving husband, father, and grampy. Calling hours will be held from 4 until 7PM on Monday, January 3, 2022 in the Philbin-Comeau Funeral Home, 176 Water St., Clinton.  A Mass of Christian Burial will be celebrated at 10AM on Tuesday, January 4, 2022 in St. John the Evangelist Church, 80 Union St., Clinton, with burial to follow in St. John’s Cemetery, Lancaster. Attendees are respectfully requested to wear a mask while attending services. Memorial contributions may be made in memory of Ronald J. Rabideau, to assist our neighbors locally, to WHEAT Community Connections, P.O. Box 847, Clinton, MA 01510. Online condolences may be placed at www.philbincomeaufh.com