In Memory of
Robert E.
Decker
1931 - 2019
Click above to light a memorial candle.
Memorial Candle Tribute From
Philbin-Comeau Funeral Home
"We are honored to provide this Book of Memories to the family."
View full message >>>
Send Flowers
Plant a Tree In Memory of Your Loved One
Click Here
Menu 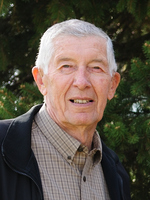 Robert Decker, 87, passed away on Saturday, April 20th, 2019 at Mary’s Haven Hospice House in Saratoga Springs, NY. “Bob” was born on June 26, 1931 to Roy and Marie (Harms) in Minneapolis, MN. He lived with his wife and family in Massachusetts for the greater part of 63 years before his move to NY this past August.
He was stationed in Norfolk, VA while serving in the Navy. He was invited to spend Christmas with a friend from Boston in 1953 and it was then that he met his wife, Charlotte (Cameron) Decker. The two were married on August 27th, 1955.
In 1971 Bob and Charlotte moved their family to the Appalachian Mountains in Eastern Kentucky where they volunteered for a year. While there, Bob was actively involved in bringing electricity and plumbing to people who lived deep in the hollows. Upon returning to Massachusetts the following year, Bob kept up with the home repair, making a career out of it.
Bob is survived by his wife, Charlotte; sons, Bob (Maureen), Stephen, and Scott (Juliet); daughter, Jennifer (Andre); grandchildren and great grandchild Grant (Betsy), Elise (Jamie), Robert, Chandra, Benjamin, Kolbe, Natalie, Nathan, Kyle, and Graham. He was preceded in death by his parents and daughter, Susan.
He is remembered by family and friends as being a man of integrity who was gentle in spirit and generous of his time and resources. His generosity has lived on in his death and he gave his body to Albany Medical College as an anatomical gift.
A Memorial Mass for Bob will be held at 11AM on Saturday, May 11, 2019 at Immaculate Conception Church, 809 Main St., Lancaster. The family will greet relatives and friends immediately following the Mass at a reception at the Chocksett Inn, located at 59 Laurelwood Road in Sterling. Memorial contributions may be made in memory of Robert E. Decker to: Beacon of Hope, 62 West St., Leominster, MA 01453. Online condolences may be placed at www.philbincomeaufh.com