In Memory of
Rita M.
Ford (Hart)
1930 - 2020
Click above to light a memorial candle.
Memorial Candle Tribute From
Philbin-Comeau Funeral Home
"We are honored to provide this Book of Memories to the family."
View full message >>>
Send Flowers
Plant a Tree In Memory of Your Loved One
Click Here
Menu 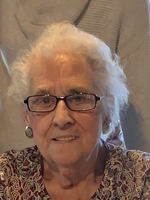 Lancaster-Rita M. (Hart) Ford, 90, lifelong resident of Lancaster, passed away peacefully on Saturday, May 9, 2020 at the Clinton Hospital from complications of COVID-19.  She is preceded in death by her beloved husband of 46 years, James J. Ford, Sr.  She is survived by her children & their spouses, James J. Ford, Jr. & Martha; Sharon Hutchins, with whom she lived, all of Lancaster; Jack Ford & Rosemary of Naples, FL; Paula Hamwey & Fred of Leominster; and Francis Ford & Melania of Fortaleza, Brazil.  She leaves her two sisters: Lucille Shepard of Gardner; and Julie Constantino & husband Paul of Clinton;  5 grandchildren and their spouses: Michelle Currier & Ian; Amanda Cannon & Chris, all of Lancaster; William Ford, Rebecca Giard & Kyle, all of Leominster; and Ronald Hamwey of Worcester; 5 great-grandchildren: Aidan, Gavin, Emma, Evan, and Daniel; numerous nieces, nephews, extended family, and many dear friends.  She is pre-deceased by her siblings: Theresa Schartner, Robert, George, and Roger Hart.
Rita was born on the family farm in Lancaster, daughter of the late John & Cecille (Pelletier) Hart.  She attended local schools and was a graduate of the Lancaster High School, Class of 1947.  In addition to raising her family, Rita worked in the cafeteria of the Nashoba Regional School District for many years and as a school bus driver for Sleeper Transportation until her retirement.  Always outspoken in her beliefs, Rita was a fierce democrat and long-time member of the Lancaster Democratic Town Committee.  She served her community as an Election official and Warden for more than forty years and was recognized for her outstanding service to the Town of Lancaster.  Rita was a parishioner of Immaculate Conception Church and former member of the Lancaster Current Topics Club.  Above all, she was the devoted matriarch of the Ford and Hart families. She was a proud mother, grandmother, and great-grandmother. To her, family was everything. She truly treasured her time spent with the family. In her later years she found great joy in spending time with her great-grandchildren. With respect to current social gathering restrictions, private funeral services with burial in St. John’s Cemetery, Lancaster, will be held privately under the direction of the Philbin-Comeau Funeral Home, 176 Water St., Clinton.  In lieu of flowers, memorial donations may be made to the Friends of the Thayer Memorial Library, 717 Main St., Lancaster, MA 01523. Online condolences may be placed at www.philbincomeaufh.com