In Memory of
Richard  J.
Cardillo
1943 - 2019
Click above to light a memorial candle.
Memorial Candle Tribute From
Philbin-Comeau Funeral Home
"We are honored to provide this Book of Memories to the family."
View full message >>>
Send Flowers
Plant a Tree In Memory of Your Loved One
Click Here
Menu 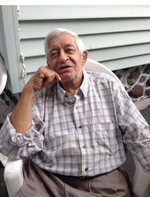 Clinton-Richard J. Cardillo, 75, passed away peacefully at home surrounded by family after a long hard fought battle with heart failure, on Friday, February 22, 2019. He is survived by his loving wife of 49 ½ years, Lucrezia (Testa) Cardillo; their son Jerry Cardillo & his partner Paul Eastwood of Clinton; his mother, Domenica Moleronek of Framingham; siblings; Carmine Cardillo, husband of the late Vittoria (Testa) Cardillo, of Clinton; Salvatore Cardillo, Jr. & Julia of Newington, CT; Rose Frisch & James of South Dennis; and Sandra Moleronek of Framingham; nieces, nephews, extended family and friends.  He is pre-deceased by his father Salvatore Cardillo and his wife Carmella Cardillo.
Richard was born in Hopkinton, raised and educated in Clinton. He worked for many years at the Colonial Press before joining Nypro, Inc., from where he ultimately retired after 20 years.  A man of faith, he was a parishioner of St. John the Guardian of Our Lady Parish in Clinton.  Proud of his Italian heritage, he took pleasure in many traditions of Italian culture, trips to Italy, and family dinners. He enjoyed long car rides that often led him to the movie theater. He too was a passionate fan who loyally cheered for the Red Sox and Patriots.  Above all, he was a dedicated husband, father, brother, uncle, and friend.  Funeral services are to be held on Wednesday, February 27, 2019 from the Philbin-Comeau Funeral Home, 176 Water St., Clinton, with a Mass of Christian Burial to be celebrated at 10AM in St. John the Evangelist Church, 80 Union St., Clinton, and burial to follow in St. John’s Cemetery, Lancaster.  Calling hours will be held in the funeral home on Tuesday, February 26, 2019 from 5 until 7PM.  In lieu of flowers, donations are encouraged to be made to the Richard Cardillo Memorial Fund, c/o Clinton Savings Bank, 200 Church St., Clinton, MA, 01510. www.philbincomeaufh.com