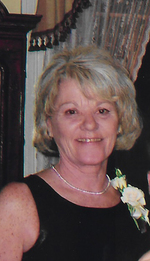 Clinton-Patricia Ann (Ernst) Cravedi, 75, passed away peacefully surrounded by her loving family on Sunday, May 5, 2019 at Leominster Hospital. She is preceded in death by her beloved husband of 39 years, Paul R. Cravedi. She is survived by her children, Paula McNamara & husband John of Leominster; Pamela Phillips of Worcester; John Cravedi & wife Marie; and Chris Vincent, all of Clinton. She leaves her siblings, Betty Ann Hawkins of Lancaster; Sandra Schartner of Bolton; and her twin sister, Pamela Innamorati & husband Kenneth of Yarmouth; 11 grandchildren, Jill, Derek, John, Nicholas, Andrew, Katie, Tyler, Jayson, Jared, Jake, and Chelsea; 11 great-grandchildren, numerous nieces, nephews, and dear friends. She is pre-deceased by her brother Anthony W. “Bud” Ernst, Jr., and her great-granddaughter Mackenzie Rose Cravedi.
Patricia was born in Clinton to the late Anthony & Ann (Matthews) Ernst. She attended Lancaster schools and graduated from the Lancaster High School, Class of 1961. In addition to raising her family, Pat, alongside her husband Paul, co-owned and operated their family business, Cravedi’s Market in Clinton. She was also later employed with GenRad before ultimately retiring after many years as a bus monitor for the Clinton Public School System. Her enjoyments were many and notably included cooking for traditional Sunday family dinners, shopping, crocheting, and summer vacations at the Empress on Salisbury Beach. Above all, Pat adored her family and was always happy to volunteer as a babysitter for her grandchildren and great-grandchildren. Funeral services are to be held on Wednesday, May 8, 2019 from the Philbin-Comeau Funeral Home, 176 Water St., Clinton, with a Mass of Christian Burial to be celebrated at 10AM at Immaculate Conception Church, 809 Main St., Lancaster, and with burial to follow at Reservoir Pines Cemetery in Clinton. Calling hours will be held in the funeral home on Tuesday, May 7, 2019 from 5 until 7PM. Memorial contributions may be made in memory of Patricia Cravedi to: Alzheimer’s Association of MA, 309 Waverley Oaks Rd., Waltham, MA 02452. Online condolences may be placed at www.philbincomeaufh.com