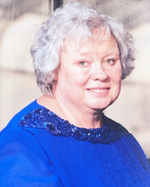 Shrewsbury-Mary Devlin (Hamilton) McLean, 81, passed away peacefully on Thursday, January 6, 2022.  She is survived by her son Stuart Alexander McLean of Pelham, NY and his four children, Alexander, Morgan, Cate and Reese; her daughter Yvonne Marie McLean of Shrewsbury; her son Alexander Hamilton McLean and his wife Alexa of Hopatcong, NJ and their four children, Alex, Mia, Mason and Mayla; her adopted daughter Meaghan McKinnon and her husband Michael and their four children Liam, Wyatt, Clay and Adelynn. Mary is also survived by six foster daughters, Allison Buchalter; Chelsea Lyon and her daughters Jasmine and Tiana; Gabi Cousineau, her husband Mike and their children Arianna and Robert; Kanani Perez and her daughters Dakota and Violet; Jessica Stuart; Jessica Bunns and her son Cameren James.  She is predeceased by her beloved brother James Hamilton.

Mary was born in Armadale, West Lothian, Scotland, daughter of the late Thomas & Mary (Reardon) Hamilton.  At the age of 19, she immigrated to the United States, married the late Alex McLean and settled in Worcester, where she began working at the iconic Widoff’s Bakery on Water Street.  In addition to raising her family, Mary was employed as a nurse’s aide at the Shrewsbury Nursing Home for many years before retiring.
Mary moved to Shrewsbury in 1969 and for many years lived on Lake Quinsigamond.  Mary enjoyed the lake where she would host plenty of cookouts and was always excited to prepare for and participate in the opening day of fishing season.  During her time on the lake her three oldest children became competitive swimmers, something she was very proud of, and was always a special help to their swim teams whether it was baking cookies or helping with fundraisers.

Mary took great joy in helping others and volunteering.  She was a long-time babysitter to many youngsters and then dedicated herself to fostering young girls in need.  Her efforts were recognized by the Commonwealth of Massachusetts as the recipient of the Governor’s Foster Mother of the Year award.

She also loved volunteering at the Mustard Seed in Worcester and at her Church, often hosting Bible Studies in her home.   Mary enjoyed cooking and baking for her family, afternoon tea with her friends, watching and feeding birds, and took pride in getting her hands dirty in her flower gardens.  Mary was an avid fan of anything Scottish, the New England Patriots and Boston Red Sox.  Most of all Mary was happiest around children and her grandchildren.  In the words of her granddaughter Cate, “Nana was an amazing person, grandma and mother and I know she will be with us every single day of the rest of our lives.”

Calling hours will be held on Saturday, January 15, 2022 from 10:30am until 12pm with a funeral service at 12pm in the Philbin-Comeau Funeral Home, 176 Water Street, Clinton.  Memorial contributions may be made in memory of Mary McLean to Wonder Fund Massachusetts on their website at www.wonderfundma.org.  Online condolences may be placed at www.philbincomeaufh.com