In Memory of
Mary  P.
Spear (Gaughan)
1947 - 2019
Click above to light a memorial candle.
Memorial Candle Tribute From
Philbin-Comeau Funeral Home
"We are honored to provide this Book of Memories to the family."
View full message >>>
Send Flowers
Plant a Tree In Memory of Your Loved One
Click Here
Menu 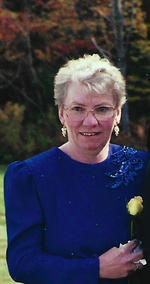 Clinton-Mary Patricia (Gaughan) Spear, 72, passed away peacefully at Clinton Hospital on Monday, October 28, 2019 after being stricken ill at home. She is survived by her beloved husband of 52 years, Robert E. Spear; two sons, Robert E. Spear, Jr. & companion Kathleen Mitchell; and Christopher J. Spear & wife Tammy, all of Leominster; one daughter, Robin M. Macadams of Clinton; and five adoring grandchildren, Maeghan, Colby, and Brady Spear, Mark and Molly Macadams. She leaves her siblings, David Gaughan & wife Jo-Ann of Worcester; Kathryn Morin & husband John of Ft. Pierce, FL; sister-in-law, Anne Gaughan of Clinton; numerous nieces, nephews, extended family and friends. She is pre-deceased by two brothers, Charles L. Gaughan and Bernard F. Gaughan.
Mary Pat was born in Clinton to the late Melvin & Rita (O’Connell) Gaughan. She attended local schools and graduated from the Clinton High School, Class of 1965. In addition to raising her family, Mary Pat worked for several local companies, including the Colonial Press, Philbin Chevrolet, and O’Connell Insurance, before accepting a position as a clerk for the Massachusetts Correctional Institute in Shirley, from where she ultimately retired. Actively involved in the community, Mary Pat was a devout parishioner of the former Our Lady of the Rosary Parish, and served as a long-time volunteer and coach for the Clinton Lassie League. She enjoyed summers at the pool, relaxing with a good book, and sharing laughs with family and friends. Funeral services are to be held on Saturday, November 2, 2019 from the Philbin-Comeau Funeral Home, 176 Water St., Clinton, with a Mass of Christian Burial to be celebrated at 10AM in St. John the Evangelist Church, 80 Union St., Clinton. Burial will follow in St. John’s Cemetery, Lancaster. Calling hours will be from 4 until 7PM on Friday, November 1, 2019 in the funeral home. Online condolences may be placed at www.philbincomeaufh.com