In Memory of
Margaret Anne "Anne"
McAndrews (Kittredge)
1934 - 2022
Click above to light a memorial candle. 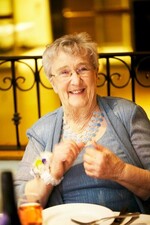 Clinton-Anne (Kittredge) McAndrews, 87, passed away peacefully surrounded by family at UMass Medical Center on Thursday, March 24, 2022. She is survived by her children and their spouses, Kathleen Sheridan and Edward, Gerard McAndrews & Marcella, Mary Beth McAndrews, with whom she lived, Kevin F. McAndrews, and Brian J. McAndrews & Pamela. She was “Grannie Annie” to her 11 grandchildren, Meghan Silvio, Maureen Mortimer, Michael, and Mark Sheridan, Christopher, Stephen, Mary, Michael, Meghan, Brian Jr., and Molly McAndrews; and 5 great-grandchildren, Kaelan, Brendan, Austin, Maura, and Elinor. She leaves her sister-in-law Marie Kittredge of Clinton, numerous nieces, nephews, extended family, and many dear friends. She is preceded in death by her siblings, Mary Kalinowski, George Kittredge, and John Kittredge, and her former husband Gerard McAndrews.
Anne was born in Clinton, daughter of the late Patrick & Mary (McNamara) Kittredge. She graduated from the Clinton High School, Class of 1951, and the Memorial Hospital School of Nursing. In addition to raising her family, Anne enjoyed her lifelong career as a Registered Nurse, working in numerous medical centers through Worcester County and New York and specializing in mental health care until retiring. Among her many enjoyments, Anne spent summers on Seabrook Beach, often travelled to the White Mountains and along the New England coastline. She completed daily jumble and crossword puzzles, had an affinity for true crime tv shows, and always kept up with local happenings with her ear on the scanner. A proud matriarch, Anne lived for her family and relished every moment spent in the company of her children, grandchildren, and great-grandchildren. A calling hour will be held from 8:30 until 9:30AM on Thursday, March 31, 2022 in the Philbin-Comeau Funeral Home, 176 Water St., Clinton, with a Mass of Christian Burial to be celebrated at 10AM in St. John the Evangelist Church, 80 Union St., Clinton, and burial to follow in St. John’s Cemetery, Lancaster. Memorial contributions may be made in memory of Anne McAndrews to: WHEAT Community Connections, P.O. Box 847, Clinton, MA 01510. Online condolences may be placed at www.philbincomeaufh.com