In Memory of
Lucille
LeBlanc (Ducharme)
1930 - 2022
Click above to light a memorial candle.
Memorial Candle Tribute From
Philbin-Comeau Funeral Home
"We are honored to provide this Book of Memories to the family."
View full message >>>
Send Flowers
Plant a Tree In Memory of Your Loved One
Click Here
Menu 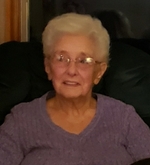 Clinton-Lucille (Ducharme) LeBlanc, 91, passed away peacefully surrounded by family in the comfort of her home on Saturday, January 8, 2022. She is preceded in death by her two husbands, Omer Patenaude and Louis LeBlanc. She is survived by her children, Rosaline Welch of Leominster; Donald Patenaude of Gardner; and Joanne Welch & husband Joseph of Hubbardston; son-in-law Everett W. Moody, Jr. of Lancaster; her sister, Georgette Stratton & husband George of Stanstead, Quebec, Canada; 21 grandchildren, 21 great-grandchildren, 4 great-great-grandchildren; nieces, nephews, extended family and friends. She is pre-deceased by two daughters, Pauline Patenaude and Francine Moody, son-in-law James D. Welch, Jr., grandson Nicholas Ryan Patenaude, and siblings, Dolores Tinker, Gerard, Leo, Paul, and Claude Ducharme.
Daughter of the late Ovide & Irene (Vein) Ducharme, Lucille was born, raised, and educated in Barnston-Ouest, Quebec, Canada. As a young wife and mother of three, Lucille tragically lost her husband Omer L. Patenaude in 1953. She later met and married Louis P. LeBlanc in 1959 and the couple would give birth to their daughter Joanne and enjoy the next 58 years of marriage together. In addition to raising her family, Lucille worked tirelessly as a quality control inspector for Nypro, Inc. in Clinton for nearly forty years until retiring, and then went to work in the cafeteria for the Lancaster Public Schools until the age of 85. Among her many enjoyments, Lucille loved dancing with her husband Louis, knitting blankets and hats for family and friends, completing jigsaw puzzles, reading books, playing Bingo, and competing in various card games. She was happiest in the company of her family and will be forever remembered as a loving mother, grandmother, sister, aunt, and friend. Calling hours will be held on Thursday, January 13, 2022 from 5 until 7PM in the Philbin-Comeau Funeral Home, 176 Water St., Clinton. A Mass of Christian Burial will be celebrated at 10AM on Friday, January 14, 2022 at St. John the Evangelist Church, 80 Union St., Clinton, with burial to follow in St. John’s Cemetery, Lancaster. Memorial contributions may be made in Lucille’s memory to: St. John the Evangelist Church-Restoration Fund, 80 Union St., Clinton, MA 01510. Online condolences may be placed at www.philbincomeaufh.com