In Memory of
Leo D.
Shortsleeve
1935 - 2022
Click above to light a memorial candle.
Memorial Candle Tribute From
Philbin-Comeau Funeral Home
"We are honored to provide this Book of Memories to the family."
View full message >>>
Send Flowers
Plant a Tree In Memory of Your Loved One
Click Here
Menu 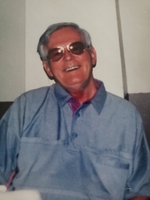 Clinton-Leo D. Shortsleeve, Sr., 87, passed away peacefully on Wednesday, March 23, 2022. He is preceded in death by his beloved wife, Rita (Linenkemper) Shortsleeve and their daughter Lynn Ago. He is survived by his children and their spouses, Leo D. Shortsleeve, Jr., Steven J. Shortsleeve & Roxana, and Donna Shortsleeve, all of Clinton; and Michael A. Shortsleeve & Vera of Barre; four grandchildren, Michael A. Shortsleeve, Jr., Christopher S. Shortsleeve, Olivia Ago, and Aaron S. Shortsleeve; two great-grandchildren, Zander and Tanner Shortsleeve. He leaves his siblings and their spouses, Paul Shortsleeve & JoAnn of Sterling; Kathleen Smith of St. Albans, VT; and James Shortsleeve of Rindge, NH; brother-in-law John Mullaney of Winchendon; nieces, nephews, extended family and many dear friends. He is pre-deceased by his siblings Charles, Richard, and Robert Shortsleeve, and Margaret Mullaney.
Raised and educated in Clinton, Leo was the son of the late Charles & Catherine (Gannon) Shortsleeve. He proudly served our nation in the US Navy as an Engineman Second Class stationed aboard the USS Bushnell. Leo returned home safely from service and was employed for many years at ITT Surprenant in Clinton and later worked as a custodian for Tahanto Regional High School until retiring. Leo was an active life member of the Clinton Elks Lodge and held membership with the Ancient Order of Hibernians. An avid sport fan, Leo closely followed NASCAR, the Red Sox and Patriots. He enjoyed bowling, going to the movies and out to dinner, especially at the Horseshoe Pub in Hudson, where he was a weekly patron. A true gentleman, Leo was blessed with an abundance of friendship and was and always the first to help another in need.

Calling hours will be held on Monday, March 28, 2022 from 5 until 7PM in the Philbin-Comeau Funeral Home, 176 Water St., Clinton. A Funeral Service will be celebrated at 10AM on Tuesday, March 29, 2022 in the funeral home, with burial to follow in St. John’s Cemetery, Lancaster. Memorial contributions may be made in memory of Leo D. Shortsleeve, Sr. to: Wounded Warrior Project, P.O. Box 758516, Topeka, KS 66675. Online condolences may be placed at www.philbincomeaufh.com