In Memory of
Joseph E.
Innamorati
1926 -
2014
Click above to light a memorial candle.
Menu
Send Flowers
Plant a Tree In Memory of Your Loved One
Click Here 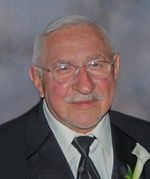 Clinton-Joseph E. Innamorati died peacefully at home on September 22nd surrounded by his family after a brief illness. He was born in Clinton on April 10, 1926, the son of Nazareno and Loreta (Contratti) Innamorati. He graduated from Clinton High School, class of 1944. Admitted to the Rhode Island School of Design, he instead decided to join his family’s construction company, Innamorati Brothers, Incorporated, beginning as a journeyman carpenter and eventually taking over the business. Mr. Innamorati had a 50-year career as a general contractor, building schools, churches, hospitals and multi-family housing complexes in Massachusetts and southern New England. In the 1960s and 70s, he constructed several schools designed by The Architects Collaborative, the firm founded by modernist pioneer Walter Gropius and a group of architects from the Harvard Graduate School of Design. Innamorati Brothers built Nashoba Regional High School, Westborough High School, the Mary Finn School in Southborough, Holden Junior High School, and schools in Framingham, Needham, and North Easton. In the 1980s, his company built several federally-funded affordable housing projects, including ones in Northampton, Dennis and Worcester. He also developed and built Prescott Mill Apartments in Clinton in a former textile mill as well as Woodland Apartments, in a former church building in Worcester. He played high school and semi-pro football in his youth and was an avid skier. Upon retirement, he pursued a life-long interest in aviation, acquiring a World War II-era PT-17 Stearman and his pilot’s license. His wife of 52 years, Kathleen (McLaughlin) Innamorati, died in 2000. He is survived by his daughter, Jean Innamorati of Clinton and Falmouth, MA, his grandson Joseph Giacomelli and fiancé Sarah Bellemare of Ithaca, New York and granddaughter Hillary Giacomelli and her husband Matthew Longman of Brooklyn, New York, his sister Ida Whitney of Clinton, brother-in-law William Connolly of Clinton, sister-in-law Margaret McLaughlin of Lancaster, and many nieces and nephews. He was predeceased by his siblings Eloe Innamorati, Mary Statuto, Iola Innamorati, Rena Connolly and Michael Innamorati. Funeral services are to be held on Friday, September 26, 2014 from the Philbin-Comeau Funeral Home, 176 Water St., Clinton, with a Mass of Christian Burial to be celebrated at 10AM in St. John the Evangelist Church, 80 Union St., Clinton. Burial will follow in Reservoir Pines Cemetery, Clinton. Calling hours will be held in the funeral home on Thursday, September 25, 2014 from 4 until 8PM. Memorial contributions may be made in memory of Joseph Innamorati to Clinton Hospital Foundation, 201 Highland St., Clinton, MA 01510 or to American Heart Association, 300 5th Ave. Suite 6, Waltham, MA 02451. Online condolences may be placed at www.philbincomeaufh.com