In Memory of
Elizabeth E. "Betty"
Marlow (Hinkle)
1947 - 2022
Click above to light a memorial candle.
Memorial Candle Tribute From
Philbin-Comeau Funeral Home
"We are honored to provide this Book of Memories to the family."
View full message >>>
Send Flowers
Plant a Tree In Memory of Your Loved One
Click Here
Menu 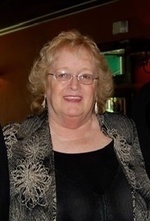 Stow-Elizabeth E. “Betty” (Hinkle) Marlow, 74, passed away peacefully on Saturday, March 26, 2022. She is survived by her two sons, Lancaster Fire Chief Michael J. Hanson and partner Kimberly March; and Lancaster Firefighter Rick Marlow & wife Amy of Leominster; four grandchildren, Kevin, Robert, Ashley, and Tiffany Hanson; and four great-grandchildren. She leaves her siblings, Patricia Fish & husband Stephen of Marlborough; Kathleen Hinkle of Washington; and Joseph Hinkle of Stow; sister-in-law Mary Lou Hinkle of Lebanon, NH; nieces, nephews, extended family and dear friends. She is pre-deceased by her son, Bryan Hanson, and her brother, Dr. Allen J. Hinkle.
Raised and educated in Bolton, Betty graduated from the Nashoba Regional High School, Class of 1966. In addition to raising three sons, Betty worked for the Metropolitan District Commission assigned to the Wachusett Reservoir and was also employed as a waitress for the former Wagon Wheel Restaurant and Bridge Diner in Lancaster. She ultimately retired as the office manager for Jeffrey Philbin Oil and Osterman Propane. A military daughter and wife, Betty lived in numerous countries including Japan and Italy and many states throughout our nation. A proud matriarch, Betty was happiest in the company of her family and will be forever remembered as a loving mother, grandmother, great-grandmother, sister, aunt, and friend. Per Betty’s wishes, private burial services will later be held in Glenwood Cemetery, Maynard. Arrangements are entrusted to the care of Philbin-Comeau Funeral Home, 176 Water St., Clinton. With appreciation for the care that Betty received in recent years, memorial contributions may be made in her memory to: Stow Firefighters Association, 511 Great Road, Stow, MA 01775. Online condolences may be placed at www.philbincomeaufh.com