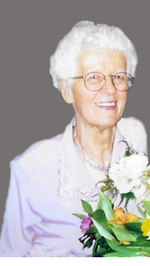 Lancaster-Constance R. (Collins) Locke, 94, passed away peacefully surrounded by her loving family on Thursday, February 7, 2019 at Knollwood Nursing Center in Worcester. She is preceded in death by her beloved husband of 61 years, Chester L. Locke. She is survived by her children and their spouses, Chester L. Locke, Jr. & Avon of Lancaster; Ruth Berry & Michael of West Boylston; W. Oren Locke & Helen of Barre; and Suzanne Mula & Peter of Princeton; siblings, Oren “Ted” Collins, Jr. & Sue of Meredith, NH; and Priscilla Manville of Center Harbor, NH; 9 grandchildren, Matthew Locke & wife Pamela, Samuel, Oren, Adam, and Brigham Locke, Hannah Richardson & husband Jason; Brian Kaltsos, Aidan and Dakota Mula; 3 great-grandchildren, William, Brigham, and Evelyn, numerous nieces, nephews, extended family and friends. She is pre-deceased by siblings, Marjorie Kennedy, Olive Asfour, June Duffy, Ruth Young, Sylvia Locke, Jeanne Wiles, Frank, Fred, and David Collins.
Connie was born in Clinton and raised in Lancaster, daughter of the late Oren T. & Ruth V. (Brigham) Collins. She graduated from the Lancaster High School, Class of 1942 and devoted herself to raising her family as a full-time homemaker. Connie later worked in several clerical positions with the Lancaster Public Library, Clinton Hospital, Colonial Press, and Fort Devens. She was a devout life member of the Evangelical Congregational Church of Lancaster. Connie loved music, as a young woman she sang with her sisters in the Collins Trio, and later for many years in her church choir. She enjoyed raising animals and livestock and growing gardens of flowers and vegetables. Above all, she loved her family and was a dedicated, proud matriarch, who will be forever missed and remembered lovingly. A Funeral Service will be at held at 11AM on Thursday, February 14, 2019 in the Evangelical Congregational Church, 793 Main St., Lancaster, with burial to follow in Eastwood Cemetery, Lancaster. There will be no calling hours held. Memorial contributions may be made in memory of Constance Locke to: Knollwood Nursing Center, Employee Appreciation Fund, 87 Briarwood Circle, Worcester, MA 01606. Funeral arrangements are entrusted to the care of Philbin-Comeau Funeral Home, 176 Water St., Clinton. Online condolences may be placed at www.philbincomeaufh.com