In Memory of
Catherine Elizabeth
Stevenson (Whelan)
1918 - 2015
Click above to light a memorial candle.
Memorial Candle Tribute From
Philbin-Comeau Funeral Home
"We are honored to provide this Book of Memories to the family."
View full message >>>
Send Flowers
Plant a Tree In Memory of Your Loved One
Click Here
Menu 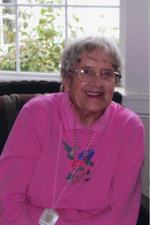 Clinton-Catherine E. (Whalen) Brown Stevenson, passed away peacefully following heart complications on Tuesday, June 9, 2015, while surrounded by her family. Catherine was born April 20, 1918, and lived 97 beautiful years. She is survived by her three sons, Gerald Brown and his wife Patricia of Gardnerville, NV; Gary Brown and his wife Gail of Clinton; and Kevin Stevenson and his fiancé Suzanne Styles of Winchendon; eleven grandchildren; nineteen great-grandchildren; two great-great grandchildren; several nieces and nephews; and many beloved friends. She is pre-deceased by her parents, Lawrence and Esther Whalen; her brother, Edward Whalen and his wife Marie; her brother, Lawrence Whalen and his wife Etta; her former husband Vincent Brown; and her former husband Lloyd Stevenson.
During her lifetime, she worked for Kirk F. J. Molding Co. Inc., Wovencraft, Inc. and Nypro, Inc. in Clinton. Upon retirement she worked in the Clinton High School Library where she enjoyed helping the students. She was a long standing and faithful member of St. John the Guardian of Our Lady Parish. She danced her heart out as a member and dear friend of the Clinton Senior Steppers, and served her community as a volunteer at the Clinton Hospital Guild Thrift Shop on High Street. Catherine went out of her way to care for her fellow neighbor, even in one instance buying a winter coat for her young newspaper carrier. She was a strong woman who found joy in being with her family and friends and will always be remembered with admiration and affection by those who knew her. A graveside service will be held at 12pm on Saturday, June 20, 2015 at St. John's Cemetery, Lancaster under the direction of the Philbin-Comeau Funeral Home, 176 Water St., Clinton. Online condolences may be placed at www.philbincomeaufh.com