In Memory of
Adrian  R.
Wilkins
1941 - 2022
Click above to light a memorial candle.
Memorial Candle Tribute From
Philbin-Comeau Funeral Home
"We are honored to provide this Book of Memories to the family."
View full message >>>
Send Flowers
Plant a Tree In Memory of Your Loved One
Click Here
Menu 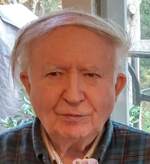 Pelham, MA-
Adrian Wilkins, owner for many years (with his wife Connie) of The Mercantile stores in Amherst and Northampton, died peacefully on Sunday, May 29th at Care One in Northampton. Glioblastoma always wins. Adrian, 80, lived a full, interesting life, but had hopes for much more.

Many in the Pioneer Valley, along with thousands who passed through as college students, will remember The Mercantile fondly. Few know that in the early 1990’s, as President of the Amherst Chamber of Commerce, Adrian convinced the Postal Service not to close the Amherst center post office when the one on University Drive was planned. For days he stood and counted the cars going past, making the case that the North Pleasant St. post office was an essential part of the community.

Born in Hudson, MA in 1941, son of the late Iris (Wheeler) Wilkins, and Arthur Wilkins, he was first in his large family to attend college, earning a Navy scholarship to Yale University. In 1964, when he graduated, the Vietnam War was percolating. Eventually assigned as a Lieutenant to the USS Calcaterra, a Destroyer Escort from WWII, he expected to be sent to Vietnam, but the ship’s captain volunteered for Antarctic duty, choosing huge waves and icebergs (and time off in New Zealand) over battle. When the ship was dented by an iceberg while the captain was having the ship’s number painted on the ice, Adrian, officer of the repairs unit, had to direct his crew not to let the authorities know. Repairs weren’t completed until they reached Marseilles on the way home, where a telegram announced that his first son had just been born.

After three years as an instructor at the naval base on Treasure Island in San Francisco Bay, Adrian’s family moved to Amherst, where he earned a Master’s Degree at UMass. Sociology Professors were in very low demand then, so he skipped a Doctorate. Instead, to stay in the area, he and Connie turned to retail, and almost miraculously made it work.

A graveside service will be held at 12:30PM on Wednesday, June 15, 2022 at Woodlawn Cemetery, Clinton. Arrangements are entrusted to the care of Philbin-Comeau Funeral Home, 176 Water St., Clinton. No donations. Just shop locally. Online condolences may be placed at www.philbincomeaufh.com