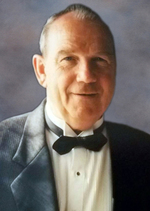 Clinton-George T. “Kitty” Kittredge, 82, a lifelong resident of Clinton, passed away peacefully on Friday, January 5, 2018 at Rose Monahan Hospice Home in Worcester. He is preceded in death by his wife Janice Day. He is survived by two daughters, Kathleen Fitzpatrick of Rutland; and Jean Bernard & husband Charles of Clinton; 6 grandchildren, Thomas and Sean Fitzpatrick, Timothy, Lauren, Kayleigh, and Brendan Bernard. He leaves his siblings, John Kittredge & wife Marie; and Anne McAndrews, all of Clinton; step-daughter, Kimberly Whitley & husband James, of West Boylston, and their children Alyssa & Laurel; step-son Jamie Day of MD; step-grandchildren Nathan McCAuley and Emma Hooper of Sterling; nieces, nephews, cousins, and many dear friends. He is pre-deceased by his infant twins and his sister Mary Kalinowski.
George was born in Clinton to the late Patrick & Mary (McNamara) Kittredge. He graduated from the Clinton High School, Class of 1953, attended Worcester Junior College, and graduated from Quinsigamond Community College with his degree in Fire Science. George proudly served our nation in the United States Navy during the Korean War and later worked as an official with the Central Intelligence Agency in Washington D.C. from 1959-1961. He then returned home and began his lifelong career as a firefighter for the Town of Clinton and was notably appointed as one of the first Captains to serve the department in 1968. In 1969 he established Clinton Locksmiths, the company he owned and operated for more than 40 years before teaching his trade to his son-in-law Chuck who proudly carries on the family business today. George served his community in numerous ways, notably as a member of the Clinton Retirement Board and Historical Commission, and as an annual presenter of the US Navy veteran wreath at the Memorial Day Parade ceremony. He was a life member of St. John the Guardian of Our Lady Parish and member of the Knights of Columbus. Kitty was a recipient of the Shillelagh Award presented by the Leprechaun Society of Clinton, and he held numerous civic memberships, including the Clinton Elks Lodge, where he played in the Pitch league for many years, Clinton Turn Verein, Clinton Fish & Game, and Ancient Order of Hibernians. Above all George was a devoted family man who loved his children and grandchildren beyond life itself. His positive outlook, constant smile, and keen wit brought laughter to all those he encountered. Kitty took pleasure in target shooting, gardening, fishing, and collecting treasures with his late wife Jan on the shores of Wells Beach, Maine. He set a wonderful example as a hard-working man of faith, a proud patriot, husband, father, and grandfather. Special thanks from George’s family to VNA Hospice, his in-home care takers, many friends and family who brought smiles to him on a daily basis throughout his illness while caring for George at home until the final day of his life. Funeral services are to be held on Wednesday, January 10, 2018 from the Philbin-Comeau Funeral Home, 176 Water St., Clinton, with a Mass of Christian Burial to be celebrated at 10AM in St. John the Evangelist Church, 80 Union St., Clinton, and burial to follow in St. John’s Cemetery, Lancaster. Calling hours will be held in the funeral home on Tuesday, January 9, 2018 from 4 until 7PM. Memorial contributions may be made in memory of George Kittredge to St. Jude’s Children’s Research Hospital-501 St. Jude Place, Memphis, TN 38105. Online condolences may be placed at www.philbincomeaufh.com