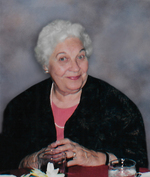 Clinton-Marilyn E. (Schobert) Center, 94, passed away peacefully surrounded by her loving family on Friday, January 5, 2018 at Oakdale Rehab and Skilled Nursing Center in West Boylston. She is preceded in death by her beloved husband of 50 years, George M. Center, Sr., and their son, Robert W. Center. She is survived by her children and their spouses, Suzanne Werner of Myrtle Beach, SC; George “Mark” Center, Jr., Bruce E. Center; Kevin J. Center and Barbara, all of Clinton; and Sandra Leger & Jeffrey of Rutland. She leaves her sister Norma McCarty of Lancaster; daughter-in-law Maureen Center of Clinton; 6 grandchildren & their spouses, Jason Watson & Nicole of Holden; Craig Watson & Liz of Rutland; Brittany Center Brier; Lindsay Center, Emilie Center, and Sarah Center, all of Clinton; 9 great-grandchildren, Brady, Kailyn, Jamison, Lia, Brooke, Tyler, Allie, Robbie, and Max; numerous nieces, nephews, cousins, and many dear friends.
Marilyn was born in Clinton to the late George & Minnie (Sontag) Schobert. She graduated from the Clinton High School, Class of 1941 and Salter Secretarial School, Class of 1942. Marilyn worked as an office manager in the Social Services Department of the Clinton Hospital and later with the office of Dr. Steven Fine for many years before retiring. She was a long time member of the United Church of Clinton and Treasurer of the Clinton Hospital Guild. She swam with the Aqua Maids at Perkins School, and served as a volunteer with the election committee for the Town of Clinton. Marilyn loved sports and was a devoted fan of the New England Patriots and Boston Red Sox. She enjoyed summers on Wells Beach, Maine, and was happiest while in the company of her children, grandchildren and great-grandchildren. The Center family would like to express their appreciation to the staff and friends at the Corcoran House in Clinton and Oakdale Rehab in West Boylston for the care and compassion shared with Marilyn and their family throughout her illness. A Funeral Service will be celebrated on Tuesday, January 9, 2018 at 10AM in the United Church of Clinton, 109 Haskell Ave., with burial to follow in Woodlawn Cemetery. Calling hours will be held on Monday, January 8, 2018 from 5 until 7PM in the Philbin-Comeau Funeral Home, 176 Water St., Clinton. Memorial contributions may be made in memory of Marilyn Center to either the Clinton Hospital Guild, 201 Highland St., Clinton, MA 01510 or to the United Church of Clinton, 109 Haskell Ave., Clinton. Online condolences may be placed at www.philbincomeaufh.com