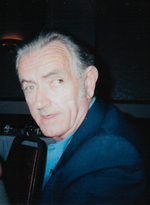 Berlin-Edward E. Rogers, 77, passed away peacefully at Oakdale Rehab and Skilled Nursing Center in West Boylston on Monday, January 1, 2018. He is survived by his brother Frederick Rogers of Hudson; generations of nieces and nephews, including Sue Belfield & husband Bill, Richard and Bud Auger, Andrea Galeski, Matthew Brodeur & wife Linda, Lisa Schofield, Patty Torchio, Carol Nelson, Thomas, Patty, Michael, and Cathy Rogers; numerous grand-nieces and nephews, notably Holly Brodeur, and many dear friends. He is pre-deceased by two sisters, Helen Auger, and Joan Rogers.
Ed was born, raised, and educated in Westborough, son of the late Elton & Johanna (Horgan) Rogers. Throughout his career he was employed as an auto detailer with several auto dealerships including Deering-Cote in Marlborough and Tucks Trucks in Hudson. Ed was an avid and accomplished fly fisherman who fished countless streams and lakes throughout New England. He was a dedicated football fan, especially of the New England Patriots, and held a great interest in history. Ed was a man of faith and member of St. John the Guardian of Our Lady Parish in Clinton. He was happiest in the company of his family and will be forever remembered as a loving brother, uncle, and friend. Funeral services are to be held on Monday, January 8, 2018 from the Philbin-Comeau Funeral Home, 176 Water St., Clinton, with a Mass of Christian Burial to be celebrated at 10AM in St. John the Evangelist Church, 80 Union St., Clinton, with burial to follow in St. Luke’s Cemetery, Westborough. Calling hours will be held in the funeral home on Sunday, January 7, 2018 from 2 until 4PM. Memorial contributions may be made in memory of Edward Rogers to St. John the Evangelist Church, c/o 149 Chestnut St., Clinton, MA 01510. Online condolences may be placed at www.philbincomeaufh.com