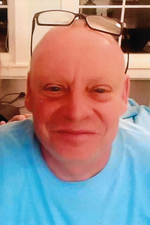 Shrewsbury-Robert J. “Zeke” McLaughlin, 58, died unexpectedly at UMass Medical Center on Monday, December 4, 2017. He is survived by his beloved wife Sheila (Murray) McLaughlin; his father, Robert J. McLaughlin; siblings and their spouses, Karen Mann; and Diane Flanagan & Thomas, all of Boylston; Ann Marie Thompson & Vaughn of Berlin; and Marlene Gedenberg & Paul of Auburn; step-daughter Lindsay Rocheleau and her daughter Layla of Clinton; numerous nieces, nephews, and friends. He is pre-deceased by his mother Mildred (Sullivan) McLaughlin. Bobby grew up in Boylston and attended Tahanto Regional High School. A career diesel mechanic, he formerly worked for BP Trucking and was currently employed with AJ Letourneau in Worcester. He held a great passion for restoring classic cars and was happiest while riding his Harley-Davidson motorcycle. He will be forever remembered as a loving husband, son, brother, uncle, and friend. A Funeral Service will be held at 10:30AM on Saturday, December 9, 2017 in the Philbin-Comeau Funeral Home, 176 Water St., Clinton, with calling hours prior from 9 until 10:30AM. Burial will follow in Pine Grove Cemetery, Boylston. www.philbincomeaufh.com