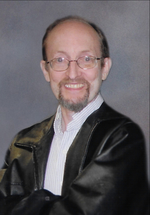 Worcester-Stephen F. Johnson, 64, passed away peacefully on Tuesday, December 5, 2017 following a long illness. He is survived by his loving and devoted wife of 35 years, Anne (Cournoyer) Johnson; his beloved beagle Rory; a brother, Paul P. Johnson of RI; nephews whom he adored, Dr. Patrick W. Nelson of WI; and Christopher L. Nelson of Clinton; niece Sarah Johnson of Maynard; sister-in-law Joan Nelson & husband Ralph of Clinton; and a close friend Louis Borgilt. Stephen was born in Holden, son of the late Frank P. and Claire P. Johnson. He was a graduate of Wachusett Regional High School and Worcester Junior College. He worked for the Worcester Public Library, where he met Anne, before joining Babcock Power as a Records Technician until his retirement. He was an avid reader, dedicated baseball fan with a great passion for history. His humor, optimism and genuine care for others will be greatly missed. His family would like to thank the South 5 Dialysis Unit and Dr. Howard Alfred. A Funeral Service will be held at 3 PM on Saturday, December 9, 2017 in the Philbin-Comeau Funeral Home, 176 Water St., Clinton, with a calling hour from 2-3PM. Burial will be private. Please omit flowers. Memorial contributions in his memory may be made to: Worcester Animal Rescue League.
www.philbincomeaufh.com