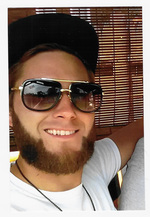 Clinton-Jeremy R. Parker, 30, died unexpectedly at home on Thursday, November 16, 2017. He is survived by his mother, Donna (Michaud) Parker & companion Michael Sanders; his father Patrick A. Parker; and brother, Patrick J. Parker, all of Clinton; his maternal grandmother Doris Michaud of Sterling; paternal grandmother Viola Parker of Camden, OH; close friend Ciara Figueroa of Clinton; numerous aunts, uncles, cousins, extended family, and friends.
Jeremy was raised and educated in Clinton, and graduated from the Clinton High School, Class of 2005 as a standout athlete and member of the varsity football team. He was awarded scholarship to attend Norwich University before completing studies at Quinsigamond Community College. Jeremy was fascinated with construction and woodworking and enjoyed his career with T.H. Smith Rebuilding & Remodeling of Sterling and J. Bates Construction of Clinton. Because there are too many adjectives to describe him, above all, Jeremy was devoted to family and friends. A gifted guitarist, his passion was writing, composing, creating, and playing music with his heart and soul. Jeremy loved sports, alien movies, pulling practical jokes on friends, drinking wine, boating on the pond, and dancing like his legs were made from spaghetti. He always brought a laugh and a smile to the room he was in and his memory will forever live on. Calling hours will be held from 4 until 8PM on Tuesday, November 21, 2017 in the Philbin-Comeau Funeral Home, 176 Water St., Clinton. A Funeral Service will be celebrated at 10AM on Wednesday, November 22, 2017 at Hope Chapel, 35 Chocksett Road, Sterling. Burial will follow in St. John’s Cemetery, Lancaster. Memorial contributions may be made in memory of Jeremy Parker to the Billy Winn Memorial Fund, c/o Avidia Bank, 1073 Main St., Clinton, MA 01510. Online condolences may be placed at www.philbincomeaufh.com