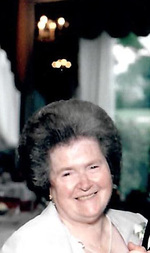 Clinton-Vittoria (Testa) Cardillo, 87, passed away peacefully at home surrounded by her loving family on Thursday, November 16, 2017. She is survived by her beloved husband of 54 years, Carmine Cardillo; their children, Carmine S. Cardillo & wife Pam Vickers-Cardillo of Northboro; and Maria A. Cardillo of Clinton; granddaughter Jillian St. Cyr & wife Melissa of Clinton; 2 great-grandchildren, Dalton & Jenna-Kate. She leaves her sister, Lucrezia Cardillo & husband Richard of Clinton; several nieces & nephews, notably her primary caregiver, Jerry “Chi-Chi” Cardillo & partner Paul Eastwood, of Clinton; mother-in-law Florence Halterman of Framingham; sisters and brothers-in-law, Rose Frisch & husband Jim; Salvadore Cardillo & Julia; and Sandra Moleronek; extended family and many dear friends. She was pre-deceased by her sister Carolina Delfino, mother-in-law Carmela Cardillo, father-in-law Salvatore Cardillo; and canine companion Lumpy.
Vittoria was born in Prata Sannita, Italy to the late Salvatore & Antoinetta (Russo) Testa. She immigrated to the United States in 1963 and settled in Clinton where she raised her family. Vittoria worked for the former Van Brode Company before joining Injectronics, from where she ultimately retired. In her spare time she enjoyed tending to her garden and preparing meals for family and friends. She loved the beaches of Maine and was a devoted fan of Tom Brady and the New England Patriots. Vittoria was a woman of great faith and devout member of St. John the Guardian of Our Lady Parish in Clinton. She dedicated herself to her family and will be forever remembered as a loving wife, mother, grandmother, great-grandmother, sister, aunt, neighbor and friend. Funeral services will be held on Monday, November 20, 2017 from the Philbin-Comeau Funeral Home, 176 Water St., Clinton, with a Mass of Christian Burial to be celebrated at 10AM in St. John the Evangelist Church, 80 Union St., Clinton. Burial will follow in St. John’s Cemetery, Lancaster. Calling hours will be held in the funeral home on Sunday, November 19, 2017 from 2 until 5PM. Memorial contributions may be made in memory of Vittoria Cardillo to: Clinton Senior Center, 271 Church St., Clinton, MA, 01510 or to St. Vincent de Paul, c/o 149 Chestnut St., Clinton, MA 01510. Online condolences may be placed at www.philbincomeaufh.com