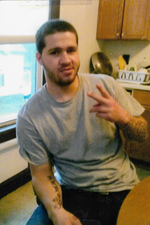 Clinton/Worcester-John Robert “J.R.” Kane, 28, died Friday, November 3, 2017. He is survived by his mother, Michelle Regonini & companion Yamil Miranda of Worcester; his father, John H. Kane; and paternal grandmother Violet Kane, both of Lancaster; siblings, Brenda Garreffi, Michael Kane, Stephen Kane, Joshua Miranda, Nathaniel Aviles, William Chase, Jr., Levi Kane, Gary Garreffi, Charlie Garreffi, and Yamil Miranda, Jr.; aunts & uncles, Kris Regonini & companion Paul Byron; Marc & Sachie Regonini; and James & Kim Kane. He leaves his girlfriend Ashley Greenman, his godson, William Chase III; numerous nieces, nephews, cousins, and many dear friends. He is pre-deceased by his grandmother, Charleen Scesny, grandfather John R. Kane, siblings Jennifer Colon and Vincent Garreffi, and aunt Linda Lynch.
J.R. was raised and educated in Clinton and worked for many years in construction with several local contractors. He was an avid outdoorsman who enjoyed camping and fishing. He loved the Patriots, trips to Salisbury Beach, and the chance to play jokes on family and friends. He had a great sense of humor, a heart of gold, and was the first to give the shirt off his back to another in need. He will be remembered lovingly and forever missed by all who knew him. Calling hours will be held on Friday, November 10, 2017 from 4 until 7PM in the Philbin-Comeau Funeral Home, 176 Water St., Clinton. A graveside service will be celebrated at 10AM on Saturday, November 11, 2017 in Reservoir Pines Cemetery, Clinton. Memorial contributions may be made: GoFundMe.com/John “JR” Kane funeral fund. Online condolences may be placed at www.philbincomeaufh.com