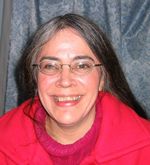 Sterling-Marie (Martinez) Malcolmson, 59, passed away peacefully at Clinton Hospital on Wednesday, October 18, 2017. A long time resident of Clinton, she most recently lived in Sterling with Philip Kneeland, her life partner of many years. Marie was a recognizable face to most Clintonians, many of whom were long time friends. Her valuable work as a Sunday School teacher at the Clinton Presbyterian Church helped shape the lives of children during her many years of service. She was often greeted fondly as "Miss Marie" by many of her former Sunday School students. Marie's delightful naivete underscored her constant optimism as well as her faith in friends and strangers alike. She was a fine conversationalist and a great listener. Her gregarious and genial personality helped create friendships wherever she traveled. Marie’s positive outlook, despite many health difficulties, made her an inspiration to those around her. Remarkably, it appeared that the greater the challenges Marie faced, the more cheerfulness she was able to share. Her patience and acceptance seemed to know no bounds.
She is survived by her mother, Edie (Schaub) Martinez of Belmont as well as siblings and their wives: Pablo Martinez & Rebecca of Waltham, John & Kannikar Martinez of Singapore and David Martinez of Springfield. Other surviving relatives include her nephews, Christopher and Rafael Martinez, numerous cousins and extended family. She is pre-deceased by her father Ferdinand Martinez. Her devotion to her family was unwavering. Marie was born in Niagara Falls, New York, raised in Belmont and graduated from Arlington Catholic High School. She obtained an undergraduate degree in Education and a Master’s degree in Special Education, both from Fitchburg State College. Marie possessed a keen intellect and was a voracious reader. She enjoyed the company of cats, often sharing her household with three or more of them at a time. Marie opened her home and her heart to all and she will be greatly missed. A Funeral Service will be celebrated at 11AM on SUNDAY, NOVEMBER 12, 2017 in the Clinton Presbyterian Church, 175 Chestnut St., Clinton. Calling hours will be held on SATURDAY, NOVEMBER 11, 2017 from 2 until 4PM in the Philbin-Comeau Funeral Home, 176 Water St., Clinton. Online condolences may be placed at wwww.philbincomeaufh.com