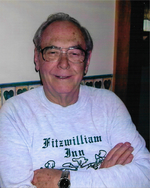 Clinton-Paul E. Wood, 90, passed away peacefully at home surrounded by his loving family on Saturday, October 14, 2017. He is preceded in death by his beloved wife of 71 years, Eleanor (Hamilton) Wood, who passed away in April. He is survived by his children & their spouses, Kathleen Burgwinkle & Joseph of Bolton; Dorreen Quinn & Robert of Clinton; Colleen Warren & Ronald of Winchendon; and Paul V. Wood of Clinton; grandchildren, Jessica, Rebecca, Elisha, Carrie, Robert, Craig, Melanie, Stephanie, and Josh; great-grandchildren, Casey, Ryan, Mia, Molly, Patrick, Michael, Erik, Evelyn, Tasha, Lucy, Macy, Elyse, Daphne, and Gwen; nieces Donna Hamilton & daughter Amy; and numerous friends. He was pre-deceased by his mother, Sarah Rice, step-father Arthur Rice, and his sister Pauline.
Paul was born in Leominster, raised in Lancaster and attended local schools. He enlisted to proudly serve our nation in the United States Navy during WWII and returned home safely to begin his career. Paul worked for the Lancaster Mills and later with New York Laminating, before joining Nypro, Inc., from where he ultimately retired after nearly twenty years. In addition, he and his wife opened, owned, and operated Paul & El’s Natural Food Store on High Street in Clinton for many years. Paul was a member of St. John the Guardian of Our Lady Parish in Clinton. He was the former president and active member in the Clinton Softball League. Paul was an avid sports fan, who also enjoyed gardening and time in the company of his family. A Funeral Service will be held at 11AM on Friday, October 20, 2017 in the Philbin-Comeau Funeral Home, 176 Water St., Clinton, with calling hours prior from 9:30 until 11AM. Burial will follow in St. John’s Cemetery in Lancaster. Memorial contributions may be made in memory of Paul E. Wood to: Beacon Hospice, 36 Williams St., Leominster, MA 01453. Online condolences may be placed at www.philbincomeaufh.com