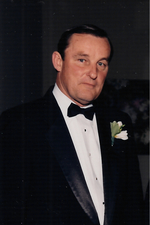 Clinton-Michael J. Burdell, 76, passed away peacefully in his residence on Friday, September 29, 2017. He is survived by his siblings and their spouses, Mona Berube & Christopher of Westminster; and James Burdell & Linda of Hadley; nephews, Michael Berube and Alexander Berube of Westminster; and Cole Burdell of Hadley; aunts, Patricia McEvilly of Clinton; and Regina Ferrera of Milford; numerous cousins and many dear friends.
Mike was born in Clinton to the late Lloyd & Lucy (Stuka) Burdell. He graduated from the Clinton High School, Class of 1959, where he excelled as a student athlete, served as class treasurer, and was selected as tri-captain of the varsity football, basketball, and baseball teams during his senior year. Mike proudly enlisted to serve our nation in the US Air Force in 1960 and was honorably discharged after four years of service. He returned home safely to continue his education and obtain his Bachelor’s degree from Worcester State College. Mike worked in the construction field and later with several companies including New England Grocers and Washburn & Garfield before ultimately retiring from the Clinton Public School System, where he was employed as a janitor for ten years. He was a man of great faith; a member of the former Our Lady of Jasna Gora Parish and current member of St. John the Guardian of Our Lady Parish in Clinton. A long time scratch golfer, Mike played in several golf leagues throughout the years and held membership with various courses, including Wachusett Country Club, Holden Hills, and Cyprian Keyes. He was a member of the Greendale Men’s Club, the American Legion and Clinton Elks Lodge. He was proud of his many years of sobriety and was an encouraging friend to anyone in need. A Funeral Service will be celebrated at 11AM on Thursday, October 5, 2017 in the Philbin-Comeau Funeral Home, 176 Water St., Clinton, with burial to follow in St. John’s Cemetery, Lancaster. Calling hours will be held on Wednesday, October 4, 2017 from 5 until 7PM in the funeral home. Memorial contributions may be made in memory of Michael Burdell to: Massachusetts General Hospital, Vascular Surgery Department, c/o MGH Development Office, 125 Nashua St., Suite 540, Boston, MA 02114. Online condolences may be placed at www.philbincomeaufh.com