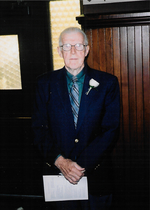 Clinton-William J. O’Malley, 96, passed away peacefully in his residence on Friday, September 22, 2017. He is survived by his brother, Walter S. O’Malley of Clinton; nieces & nephews, Maryann Castillo of Clinton; Maryann Rymsza of Chatham; Leslie Paquin of Dennis; Walter F. O’Malley of Stow; Daniel D. O’Malley, Jr. of Columbus, OH; Robert M. O’Malley, Jr. of Phoenix, AZ; Josepha O’Malley, Esq. of Annapolis, MD; and John P. O’Malley of El Paso, TX; 19 grand-nieces & nephews, 17 great-nieces & nephews. He is pre-deceased by his siblings, John E. O’Malley, Eileen Nekuda, Daniel D. O’Malley, and Lt. Col. Robert M. O’Malley, grand-nephew Paul Rymsza, and grand-niece Celeste Castillo Lee.
William was born in Clinton to the late John E. & Anne (Schofield) O’Malley. He graduated from the Clinton High School, Class of 1941 and attended Bryant-Stratton College. William proudly served our nation in the US Navy during World War II and participated in the Pacific and Atlantic Theaters while stationed aboard the destroyer escort USS Reeves. While abroad, he spoke of the opportunity to attend Mass in China, where at that time, all services were celebrated in Latin, helping him to feel right at home in a foreign land. He returned home safely and worked for Tracer Labs in Waltham before joining Standard Sign in Clinton, from where he retired after more than twenty years. In retirement, William enjoyed many years at his favorite place, the International Golf Club in Bolton. A man of great faith he was a life member of St. John the Guardian of Our Lady Parish in Clinton, from where he served as a member of the church choir, Knights of Columbus, and Holy Name Society. William was a life member of the Destroyer Escort Association and a proud patriot who served his country with distinction. A calling hour will be held on Saturday, September 30, 2017 from 10:30 until 11:30AM in the Philbin-Comeau Funeral Home, 176 Water St., Clinton, with a Mass of Christian Burial to be celebrated at 12pm in St. John the Evangelist Church, 80 Union St., Clinton. Burial will follow in St. John’s Cemetery, Lancaster. Memorial contributions may be made in memory of William J. O’Malley to: Catholic TV, P.O. Box 9196, 34 Chestnut St., Watertown, MA 02471. Online condolences may be placed at www.philbincomeaufh.com