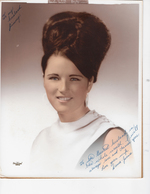 Clinton-Donna-Jeanne (Alexander) Matthews, 68, passed away peacefully on Saturday, August 19, 2017. She is preceded in death by her beloved husband of 34 years, James K. Matthews, and their son Walter Matthews. She is survived by her loving daughter Joy Matthews & her companion Christopher Coote, of Clinton; her mother, Joyce Alexander of Littleton; grandson Christian Smith of Clinton; siblings and their spouses, James Alexander & Jan of Tyngsborough; and Mark Alexander & Sandy of Littleton; several nieces, nephews, cousins, and many dear friends. She is pre-deceased by her father James Alexander and brothers Wally and David Alexander.
Donna-Jeanne was born in Detroit, Michigan and was later raised in Concord, where she attended local schools and graduated from the Concord-Carlisle Regional High School, Class of 1966. She worked for Nypro, Inc. and Buck Chair before establishing, owning and operating her own business, Renuit Upholstery, located in Ayer and later Clinton for many years before retiring. She volunteered for WHEAT Community Service and was always happy to help another person in need. Donna-Jeanne loved the outdoors, and as a member of the Appalachian Moutain Club, enjoyed hiking explorations throughout New England. She was a talented cook who prepared feasts from her kitchen and an avid gardener who took pleasure in tending to her vegetables and flowers. She devoted herself to her family and will be forever remembered as a dedicated wife, mother, grandmother, daughter, sister, aunt, and friend. A graveside service to lie to rest and celebrate the lives of Donna-Jeanne Matthews, her husband James Matthews, and their son, Walter Matthews will be held at 10AM on Saturday, August 26, 2017 at Eastwood Cemetery in Lancaster. Online condolences may be placed at www.philbincomeaufh.com