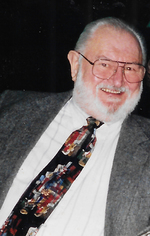 Clinton-William J. Murrman, 81, passed away peacefully on Monday, August 7, 2017 at the Life Care Center of Leominster. He is pre-deceased by his beloved wife of 53 years, Mona (Nilsson) Murrman. He is survived by three loving daughters, Julie Sloan & husband Jeff of Clinton; Karen Murrman of Lancaster; and Lisa Murrman of Clinton; granddaughter Kasey Leavitt & husband Steven, and great-grandchildren, Camden & Rylan Leavitt, all of Worcester; several cousins, extended family and many dear friends.
Bill was born in Clinton to the late John & Mildred (Toole) Murrman. He graduated from the Clinton High School, Class of 1953 and the Massachusetts College of Pharmacy, Class of 1957. He enjoyed his successful career as a Pharmacist, first working with the Federal Drug Administration in Boston, and later as chief Pharmacist at Leominster Hospital, before joining Sanford Pharmacy in Clinton, which he ultimately owned and operated for more than 25 years. With his strong dedication to caring for patients, he continued part-time work as a Pharmacist with Fallon Clinic until retiring in 2000. Bill held membership with the Clinton Elks Lodge and was a fifty year member of the Trinity Lodge AF & AM in Clinton. He was a talented singer and long time performer with the Clinton Community Theatre. An expert marksman, Bill was a past member of the Gun Owners Action League and the Clinton Fish & Game, and was a certified safety instructor for both pistol and rifle courses. In addition, Mr. Murrman was a certified EMT and taught CPR classes locally for many years. Bill was very proud of his Irish heritage and took pleasure in several trips to the Emerald Isle tracing his family genealogy to Louisburgh, County Mayo, Ireland. He was happiest while in the company of his wife, daughters, granddaughter, and great-grandchildren and will be forever missed as the devoted patriarch of the family. A Funeral Service will be celebrated at 10AM on Friday, August 11, 2017 in the Philbin-Comeau Funeral Home, 176 Water St., Clinton, with burial to follow in Reservoir Pines Cemetery. Calling hours will be held from 5 until 7PM on Thursday, August 10, 2017 in the funeral home. Memorial contributions may be made in memory of William J. Murrman to: The Item Appeal, c/o Clinton Savings Bank, 200 Church St., Clinton, MA 01510. Online condolences may be placed at www.philbincomeaufh.com