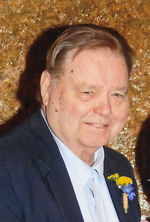 Lancaster-Theodore R. Manning, 72, passed away peacefully surrounded by family on Thursday, August 3, 2017 at Clinton Hospital. He is survived by his beloved wife of 53 years, Karen Ann (Hiller) Manning; their children and spouses, Dustin Manning & Meg of Rochester, NY; Kimberly Carbonneau & Seth of Holden; Spencer Manning & Charlene of Northbridge; and Courtney Manning & Rebecca of Lancaster; 4 grandchildren, Maki & Alli Carbonneau, and Coulton & Ellory Manning; several nieces, nephews, and dear friends.
Ted was born in Worcester to the late John & Linda (Maki) Manning. He was raised in West Boylston, graduated from the West Boylston High School, Class of 1962, and obtained his professional degree in Landscape Architecture and Golf Course Design from UMass Amherst. Ted enjoyed a successful career designing and building golf courses around the globe while working alongside some of the greatest golfers to ever play the game. He also served his community faithfully as a board member with numerous civic organizations in Lancaster, notably as DPW Commissioner, and remained actively involved with town politics. In retirement, Ted devoted years to studying and becoming an expert and consultant on the complex laws of the Massachusetts Tax Code, and was always happy to share his advice with others. In addition, he was a talented marksman, lifelong member of the NRA, and dedicated fan of New England sports teams. Above all, he was a devoted husband, father, and grandfather who will be forever missed by his family and friends. Funeral services will be held privately under the direction of the Philbin-Comeau Funeral Home, 176 Water St., Clinton. Memorial contributions may be made in memory of Theodore R. Manning to: Lancaster Firefighters Association, 1055 Main St., Lancaster, MA 01523. Online condolences may be placed at www.philbincomeaufh.com