Obituary for Robert B. "Ace" Kelly 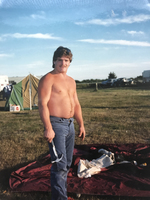 Leominster-Robert B. “Ace” Kelly, 53, died Monday, July 31, 2017 at UMass Medical Center in Worcester following a brief illness. He is survived by the love of his life, Virginia Knight; his children, Michelle Kelly of Marlborough; Amanda Knight of Clinton; Lisa Kelly, and Robert Kelly, both of Leominster; and 5 adoring grandchildren, Alexander, Jonathon, Nathan, Savanna, and Bentley. He leaves his siblings, Tina, Lillian, Cathy, Cynthia, Patrick, Derek, David, and Leandra; numerous nieces and nephews, notably Kristy Wheeler, extended family and many dear friends. He is pre-deceased by his brother John O’Connor.
Robert was born in Clinton son of Patrick Kelly & the late Rosalie (Bufton) Bergeron. He was raised and educated in Clinton and was employed throughout his career as a laborer with various local construction companies. He worked tirelessly to provide for his family and looked forward to summer vacations camping together at Salisbury Beach. He was always one to give the shirt off his back to someone in need. Ace was compassionate, and his happy-go-lucky personality created friendships wherever he traveled. He enjoyed an abundance of love and support from family and all who cared for him. Calling hours will be held from 2 until 4PM on Saturday, August 5, 2017 in the Philbin-Comeau Funeral Home, 176 Water St., Clinton. Online condolences may be placed at www.philbincomeaufh.com