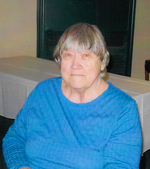 Lancaster-Ruth (Addison) Baird, 88, passed away peacefully on Saturday, July 22, 2017 at River Terrace Healthcare Center in Lancaster following a brief illness. She is preceded in death by her beloved husband of nearly 60 years, John I. Baird, and their son Paul A. Baird. She is survived by two sons, Gary P. Baird, husband of the late Sandra (Todino) Baird, of Lancaster; and Eric E. Baird of Fitchburg; her grandchildren, Albert, Paul, Corey, Craig, and Victoria Baird, Kevin and Jeffrey Spear; her adoring great-grandchildren; her sister, Barbara Tellier & husband Francis of Leominster; daughter-in-law Joan Baird of Lancaster; son-in-law Richard Spear of Florida; several nieces, nephews, and many dear friends. She is pre-deceased by her brother Kenneth Addison, and two step-children, Elizabeth Spear and John D. Baird.
Ruth was born in Bomoseen, Vermont to the late Wallace & Edith (Francie) Addison. She graduated from Kents Hill School in 1946 and obtained her bachelor degree in Literature from Atlantic Union College. In addition to her long time position as a Librarian for the Thayer Memorial Library in Lancaster, Ruth was a passionate writer and published author. She wrote a gardening column for the Clinton Item and Worcester Telegram & Gazette, and contributed to Yankee Magazine. She published numerous works of poetry as well as several cook books. A gifted baker, her desserts and famous pies were sold by Deershorn Farm and Meadowbrook Orchards for many years. Ruth was happiest at home, where she enjoyed time in her garden and raising her animals, including steer and chickens. A devoted matriarch, she will be forever missed and remembered lovingly by her family and friends. A Funeral Service will be celebrated at 11AM on Thursday, July 27, 2017 in the Philbin-Comeau Funeral Home, 176 Water St., Clinton, with burial to follow in Reservoir Pines Cemetery. Calling hours will be held from 5 until 7PM on Wednesday, July 26, 2017 in the funeral home. Memorial contributions may be made in memory of Ruth Baird to: Lancaster Firefighters Association, 1055 Main St., Lancaster, MA 01523. Online condolences may be placed at www.philbincomeaufh.com