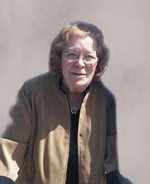 Clinton-Mary Patricia (Harrington) Kittredge McNally, 74, passed away peacefully surrounded by her family on Sunday, July 16, 2017 at Holy Trinity Healthcare Center in Worcester. She is survived by her two loving daughters, Kathleen Fitzpatrick of Rutland; and Jean Bernard & husband Charles of Clinton; her sister, Jean Gefteas & husband William of Canton; 6 grandchildren, Thomas and Sean Fitzpatrick, Timothy, Lauren, Kayleigh, and Brendan Bernard; several nieces, nephews and many dear friends. She is pre-deceased by her husband Michael A. McNally and her sister Frances Schwab.
Patsy was born in Holden to the late Joseph & Josephine (Harrity) Harrington. She was raised in Clinton and graduated from the Clinton High School, Class of 1960. She graduated from the Burbank Hospital School of Radiology and enjoyed a successful career as an X-Ray technician with Burbank Hospital before ultimately retiring from UMass Memorial Medical Center in Worcester. Patsy devoted herself to family and was happiest while in the company of her daughters and grandchildren. She was an avid reader who also enjoyed country music, attending concerts, and summer trips to the beach. Her family wishes to express their gratitude to the amazing friends who remained by Patsy’s side throughout her lengthy illness. Patsy will be dearly missed and remembered lovingly as a dedicated mother, grandmother, sister, aunt, and friend. Funeral services are to be held on Wednesday, July 19, 2017 from the Philbin-Comeau Funeral Home, 176 Water St., Clinton, with a Mass of Christian Burial to be celebrated at 10AM in St. John the Evangelist Church, 80 Union St., Clinton. Burial will follow in St. John’s Cemetery, Lancaster. Calling hours will be held in the funeral home on Tuesday, July 18, 2017 from 5 until 7PM. Memorial contributions may be made in memory of Mary Patricia McNally to: The American Autoimmune Related Disease Association, c/o AARDA, 22100 Gratiot Ave., Eastopointe, MI 48021. Online condolences may be placed at www.philbincomeaufh.com