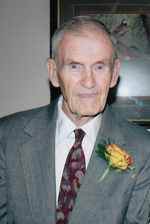 Clinton-William C. “Hauser” Braunhardt, 93, passed away peacefully at Beaumont Rehabilitation in Northborough on Friday, July 14, 2017. He is survived by his beloved wife of 70 years, Barbara (Young) Braunhardt; their children & spouses, Gary W. Braunhardt & Vicki of Princeton; Glenn C. Braunhardt & Lynette of Amston, CT; Jody Mack & Thomas of Dennis Port; Gregg R. Braunhardt & Chris Brodwell of Palm Springs, CA. He leaves four granddaughters, Abby and Alison Mack, Heidi and Emily Braunhardt; several nieces, nephews, and dear friends.
William was born in Clinton to the late William H. & Margaret (Duncanson) Braunhardt. He attended local schools and was a graduate of the Clinton High School, Class of 1941. Bill proudly served our nation in the United States Army during WWII and was awarded a
Bronze Star Medal, a Bronze Star Medal with an Oak-Leaf Cluster, and also the Combat Medical Badge for meritorious service as a Medic while assigned to D Company 397th Infantry Regiment 100th Divison. He returned home safely and began a thirty-year career with the Town of Clinton, working for the Cemetery Department and Road Departments before ultimately retiring as foreman. Bill and Barbara enjoyed many years of retirement on Cape Cod settling in Dennis Port before most recently returning to Clinton. Mr. Braunhardt was a devout member of the Presbyterian Church of Clinton and held membership with the Clinton VFW Post 523. He served as a life member and past President of the Clinton Turn Verein, where he coached Saturday morning bantam league basketball for many years and played an integral role in rebuilding Turner Hall following the fire of 1969. In addition to time with family, his enjoyments included horse racing, friendly wagers on sporting events, and Miller High Life. He was known for his quick wit and great sense of humor. Hauser will be lovingly remembered as a dedicated husband, devoted father, grandfather, uncle, and friend. A Funeral Service will be celebrated on Thursday, July 20, 2017 at 11AM at the Clinton Presbyterian Church, 175 Chestnut St., Clinton, with burial to follow in Woodlawn Cemetery. There will be no calling hours. Funeral arrangements are entrusted to the care of the Philbin-Comeau Funeral Home, 176 Water St., Clinton. Memorial contributions may be made in memory of William Braunhardt to: Turner Hall Gymnastics, 60 Branch St., Clinton, MA, 01510 or to Clinton Presbyterian Church, 175 Chestnut St., Clinton, MA, 01510. Online condolences may be placed at www.philbincomeaufh.com