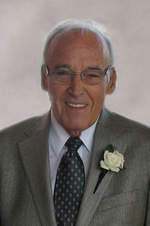 Clinton-Robert M. Bonci, 89, passed away peacefully at home surrounded by family on Wednesday, July 5, 2017. He is preceded in death by his beloved wife of 62 years, Patricia (Durkin) Bonci, who died in 2012. He is survived by two sons and their wives; Robert M. Bonci, Jr. & Mary Beth; and Thomas E. Bonci & Christine; all of Clinton; his brother, James Bonci & wife Theresa of West Boylston; grandchildren and their spouses, Jillian O’Malley & Nicholas of Clinton; Jeffrey Bonci & Holly of Milton, GA; Matthew Bonci & Samantha of Wakefield; and Cara Gilroy & Patrick of Cypress, TX; great-grandchildren, Cayleigh Gilroy, Connor, Logan, and Dominic Bonci, and triplets Aidan, Griffin, and Ronan O’Malley; several nieces, nephews, and many dear friends.
Bob was born in West Boylston to the late Felix & Lena (Zola) Bonci. He graduated from the Major Edwards High School, Class of 1945, where he was a standout athlete as a member of the Varsity Baseball and Basketball teams. He proudly enlisted to serve our nation in the United States Navy during World War II and was assigned to the Asiatic Pacific Theatre aboard the USS Norton Sound and USS Curtis. He returned home safely and began his lifelong career at ITT Surprenant Company in Clinton, from where he ultimately retired as plant foreman after more than forty years of employment. In retirement Bob worked as a part-time funeral assistant with the Philbin-Comeau Funeral Home in Clinton and later with the Tighe-Hamilton Funeral Home in Hudson, where he remained an integral staff member for nearly thirty years. Mr. Bonci was a founding member of the International Golf Club in Bolton, where through his membership tenure of more than 65 years he enjoyed countless rounds of golf and proudly achieved three holes-in-one. He held membership with numerous organizations, including the Clinton Turn Verein, Clinton Lodge of Elks, West Boylston American Legion Post 204, and the Fitchburg Social Club. A talented athlete throughout his lifetime, he was honored with induction into the West Boylston High School Athletic Hall of Fame inaugural class of 2015. He most cherished time with his family on Greeley Hill in Clinton and will be forever remembered as a devoted husband, father, grandfather, great-grandfather, brother, uncle and friend. Funeral services are to be held on Tuesday, July 11, 2017 from the Philbin-Comeau Funeral Home, 176 Water St., Clinton, with a Mass of Christian Burial to be celebrated at 10AM in St. John the Evangelist Church, 80 Union St., Clinton. Burial will follow in St. John’s Cemetery in Lancaster. Calling hours will be held in the funeral home on Monday, July 10, 2017 from 5 until 8PM. Memorial contributions may be made in memory of Robert M. Bonci to: Animal Shelter, Inc., 17 Laurelwood Rd., Sterling, MA 01564. Online condolences may be placed at www.philbincomeaufh.com