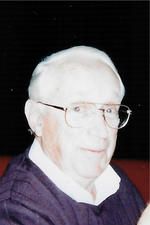 Leominster-John F. “Jack” Kerrigan, Jr., 89, passed away peacefully at Rose Monahan Hospice Residence in Worcester on Monday, July 3, 2017. He is survived by his beloved wife of 62 years, Nora (Goggins) Kerrigan; their children and spouses, Marilyn Niro & Leo of Worcester; and Robert Kerrigan & Abigail of Shrewsbury; four adoring granddaughters, Victoria and Caroline Niro, Laura and Gwendolyn Kerrigan; extended family and many dear friends. He is pre-deceased by his daughter Nancy Ann Farrington.
Jack was born in Jersey City, New Jersey to the late John F. & Cecelia (Killelea) Kerrigan. Upon relocating with his family to Clinton at a young age, Jack attended local schools and graduated from Clinton High School, Class of 1946. He then enlisted to proudly serve our nation in the United States Army during the Korean War and was assigned to the 57th Tank Battalion. He returned home safely to begin his lifelong career with ITT Surprenant Company in Clinton, from where he ultimately retired after nearly 35 years. He then enjoyed a part-time position assisting his parish at St. John’s Rectory well into his retirement years. Jack was a devout Catholic and life member of St. John the Guardian of Our Lady Parish in Clinton. He was a member of the Knights of Columbus and also held membership with the Communication Workers of America. Jack was a passionate fan of Boston sports teams and could often be found yelling helpful advice at the television during most games. He enjoyed summers on the Maine coast and time spent in his garden tending to his flowers and vegetables. Jack most cherished the company of his family and was most proud of his children and granddaughters. A calling hour will be held on Saturday, July 8, 2017 from 8:30 until 9:30AM in the Philbin-Comeau Funeral Home, 176 Water St., Clinton, with a Mass of Christian Burial to be celebrated in the Lower Chapel of St. John the Evangelist Church, 80 Union St., Clinton. Burial will follow in St. John’s Cemetery, Lancaster. Memorial contributions may be made in memory of John F. Kerrigan, Jr. to St. John the Evangelist Church-Restoration Fund, c/o 149 Chestnut St., Clinton, MA 01510. Online condolences may be placed at www.philbincomeaufh.com