In Memory of
Barbara L.
Mecum (Johnstone)
1936 -
2017
Click above to light a memorial candle.
Menu
Send Flowers
Plant a Tree In Memory of Your Loved One
Click Here 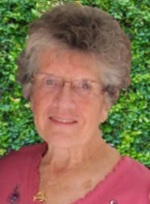 Boylston-Barbara J. Mecum, age 80, died on July 1, 2017. Barbara was a remarkable woman who lived life with grace and dignity. She was a devoted wife who with her husband created an incredible life for her six children, and multiple grandchildren and great grandchildren. She earned a bachelor’s degree from Framingham State College and a Master’s Degree in Education from Worcester State College. She taught in multiple local school districts and was a longtime member of the Church of the Good Shepherd in Clinton. She was active in the community volunteering at food pantries, visiting nursing homes, volunteering to teach English as a second language and crocheting prayer shawls.
Barbara is survived by her husband of 53 years, Barton K. Mecum, her daughters Laurie A. Hassett of Boylston; Lisa A. Campbell and husband Thomas A. Campbell of Barrington, NH; Bonnie L. Gouzias and husband James Gouzias of Mashpee; Kristen J. Fournier and husband William Fournier of Spencer; her sons, Barton K. Mecum, Jr. of Holden; and Matthew C. Mecum and wife Megan Mecum of Boylston; as well as numerous grandchildren and great grandchildren. She leaves her sisters, Linda A. Michalak, Susan J. Nolan, Holly E. Miller and Diane M. Bennett, and her brother Robert J. Bennett; sisters-in-law, Robin Bennett of Berlin, and Debra Bennett of Tampa, FL. She is preceded in death by her maternal grandfather Thomas Johnstone, her maternal grandmother Annie Laurie Johnstone, her mother, Helen Bennett, and brothers Lawrence T. Bennett and Bruce C. Bennett.