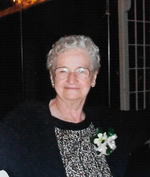 Clinton-Elizabeth “Betty” (Lyons) O’Malley, passed away at her home on June 24, 2017 surrounded by her loving family. She was 89. Betty was born in Somerville on April 4, 1928 a daughter to the late Jeremiah and Annie (Murphy) Lyons and attended local schools. Aside from her primary role as a mother, Mrs. O’Malley worked in Data Entry as a Key Punch Operator while raising her family and later retired from Nypro, Inc. in Clinton. She met and married Raymond O’Malley and moved to Clinton where they raised three children. A devout Catholic, Betty was a parishioner of the former Our Lady of The Rosary Church in Clinton. She will be remembered as a woman of strong faith who cherished her family and selflessly put others before her.
She leaves behind her loving husband of 63 years, Raymond J. O’Malley; two sons, Raymond O’Malley and his wife Joan and Michael O’Malley and his wife Patricia; and a daughter, Mary Ann Shaughnessy and her husband, Michael, all of Clinton; two sisters, Eileen Higgins of Quincy and Anne Sullivan of Jamaica Plain; eight grandchildren and five great-grandchildren; many nieces and nephews and extended family members.
A Mass of Christian Burial will be celebrated at 11AM on Thursday, June 29, 2017 at St. John the Evangelist Church, 80 Union St., Clinton. Burial will follow in St. John’s Cemetery, Lancaster. Visiting hours will be held prior to services on Thursday morning from 9 until 10:30AM at Philbin-Comeau Funeral Home, 176 Water St., Clinton. Online condolences may be placed at www.philbincomeaufh.com