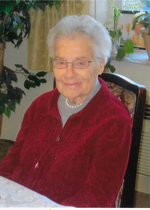 Clinton-Tina (Boodry) Dubovick Baum Norwood, 98, passed away peacefully on Monday, May 15, 2017, after a period of declining health. She is survived by her husband Robert Norwood of Worcester; her sons and their wives, James J. Dubovick & Barbara of Sterling; Walter E. Dubovick & Kathryn of Clinton; and John C. Dubovick & Linda of Pioche, NV. She leaves her beloved grandchildren, Patricia Goulet & husband Glen of Sutton; James Dubovick & wife Karen of Sterling; Kristal Dubovick of Leominster; Laura Walsh & husband David of Sterling; Amy Dubovick & husband Jamie Zelley of Princeton; Angela Dubovick & partner Dennis Lindsay of Clinton; Erin Dubovick & husband Gregory Cedrone of Winchester. She will be greatly missed by her eighteen great-grandchildren, Kayla, Clayton, Emma, Eve, Jarred, Grace, Hannah, James, Pierce, Ross, Christian, Carson, Tiegan, Kathryn, Joseph, Ella, Lillian, and Caroline. Tina also leaves her sister-in-law Sophie Taylor and several nieces and nephews. She is pre-deceased by her first husband, Walter Dubovick in 1958, her second husband, Arthur Baum in 1977, her infant son Mark, in 1955, and her two brothers, James and Paul Boodry.
Tina was born in New Bedford, on November 25, 1918, daughter of the late Chris and Clara (Howarth) Boodry, and has lived in Clinton since she was five years old. She graduated from Clinton High School, Class of 1936 and obtained her professional degree from Becker Junior College. Tina spent her career working as a secretary at both the Clinton District Court and the former Industrial School for Girls in Lancaster. She was a former member of the United Methodist Church, and current member of the United Church of Clinton, both of which she served faithfully while holding many offices over the years. Tina enjoyed ballroom dancing, bowling, and working in her garden. Her most cherished times were spent with her children, grandchildren, and great-grandchildren. Tina’s family would like to thank the staff of Manor on the Hill, and the LifeCare Center in Leominster for the wonderful care they provided. Calling hours will be held from 10 until 11:30AM on Thursday, May 18, 2017 in the Philbin-Comeau Funeral Home, followed by a Funeral Service to be celebrated at 12PM in the United Church of Clinton, 109 Haskell Ave., Clinton. Burial will take place in Woodlawn Cemetery, Clinton. Flowers may be sent or donations made in Tina’s name to the United Church of Clinton, or to the Home for Little Wanderers, 10 Guest St., 3rd Floor, Boston, MA 02135. Online condolences may be placed at www.philbincomeaufh.com