In Memory of
William John
Marhefka
1931 - 2017
Click above to light a memorial candle.
Memorial Candle Tribute From
Philbin-Comeau Funeral Home
"We are honored to provide this Book of Memories to the family."
View full message >>>
Send Flowers
Plant a Tree In Memory of Your Loved One
Click Here
Menu 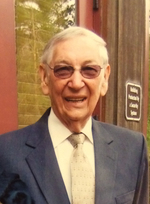 Lancaster-William J. Marhefka, 85, died Saturday, May 13, 2017 in Bradenton, Florida. He is preceded in death by his beloved wife of 65 years, Blanche “Marion” (Mills) Marhefka, who died October 4, 2016. He is survived by 2 daughters & their spouses, Debora LaManna & John of Bradenton, FL; Diane O’Malley & Michael of Sarasota, FL. He leaves his sisters, Bernice Flannagan; and Dorothy Cannon, both of Clinton; 6 grandchildren, John William McGraw, Meghan O’Malley, Robert O’Malley, Jennifer O’Connell, Penny LaManna, and Fran DelVecchio; 6 great-grandchildren, Brooke and Harper McGraw, Lilly O’Malley, Jack O’Connell, Seamus and Jake Callahan; sisters-in-law Virginia Marhefka of Clinton; and Ruth Marhefka of West Boylston; numerous nieces, nephews, cousins, and many dear friends. He is pre-deceased by three infant children, William, Robert, and Christine, and siblings Stephanie Kubiac, Statia Martini, Edward, Frank, Walter, and Joseph Marhefka.
William was born in Clinton to the late John & Stephina (Banah) Marhefka. He attended local schools and was a graduate of the Clinton High School, Class of 1949. Bill began his career with the Colonial Press in Clinton before later working for Eusey Press and ultimately retiring from Digital Equipment Company. In retirement, Bill and his family settled in Florida where they have enjoyed the past seven years. Throughout his lifetime, he was a devout parishioner of St. Francis Xavier Catholic Church in Bolton and Our Lady of Martyrs in Bradenton, Florida. He held membership with the Clinton Polish American Veterans and was an avid golfer and charter member of the old Duffer’s Group at Berlin Country Club. Bill will forever be missed and remembered lovingly as a devoted husband, father, grandfather, brother, uncle, and friend. Funeral services will be held on Friday, May 19, 2017 from the Philbin-Comeau Funeral Home, 176 Water St., Clinton, with a Mass of Christian Burial to be celebrated at 10AM at St. Francis Xavier Church, 808 Main St., Bolton. Burial will follow in St. John’s Cemetery, Lancaster. Calling hours will be held in the funeral home on Thursday, May 18, 2017 from 5 until 7PM. Memorial contributions may be made in memory of William J. Marhefka to: Alzheimer’s Association of Massachusetts, 480 Pleasant St., Watertown, MA 02472. Online condolences may be placed at www.philbincomeaufh.com