In Memory of
Elizabeth Ann
Donohue (Gibbons)
1932 - 2017
Click above to light a memorial candle.
Memorial Candle Tribute From
Philbin-Comeau Funeral Home
"We are honored to provide this Book of Memories to the family."
View full message >>>
Send Flowers
Plant a Tree In Memory of Your Loved One
Click Here
Menu 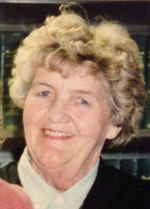 Clinton-Elizabeth Ann (Gibbons) Donohue, 85, passed away peacefully surrounded by her loving family at St. Vincent Hospital on Tuesday, May 9, 2017. She is preceded in death by her beloved husband of 55 years, Hon. James P. Donohue, who died in 2014. She is survived by her children & their spouses, Jane Sullivan & Mark; Dr. Susan Donohue Ferguson & Michael, all of Shrewsbury; James P. Donohue, Jr. & Kyle of Duxbury; and John P. Donohue & Paula of Clinton. She leaves her brother Robert G. Gibbons, husband of the late Ernestine “Honey” Gibbons, of Clinton; 7 grandchildren, Robert Donohue, Brigit Donohue, Mark Sullivan, Jr., James P. Donohue III, William Donohue, Emily Ferguson, and Owen Ferguson; several nieces, nephews, and many dear friends. She is pre-deceased by her infant brother George Gibbons.
Elizabeth was born in Clinton to the late George & Agnes (Whieler) Gibbons. She attended local schools and graduated from the Clinton High School, Class of 1949. In addition to raising her family as a full-time homemaker, she was employed for many years as the office manager of her husband’s law practice in Clinton, Atty. James P. Donohue. She later served as the Assistant Town Clerk in Clinton before ultimately retiring. A woman of great faith, Betty was a life member of the former Our Lady of the Rosary Parish and held membership with St. John the Guardian of Our Lady Parish in Clinton. She was a dedicated fan of the Boston Red Sox and most cherished time spent in the company of her family. She will be forever missed and remembered lovingly as a devoted wife, mother, grandmother, sister, aunt, and friend. Funeral services are to be held ‪on Tuesday, May 16, 2017 from the Philbin-Comeau Funeral Home, ‪176 Water St., Clinton, with a Mass of Christian Burial to be celebrated ‪at 10AM in St. John the Evangelist Church, ‪80 Union St., Clinton. Burial will follow in St. John’s Cemetery, Lancaster. Calling hours will be held in the funeral home ‪on Monday, May 15, 2017 from 4 until 7PM. Online condolences may be placed at www.philbincomeaufh.com