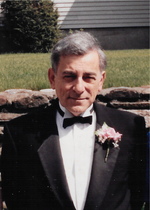 Clinton-Nicholas M. Georgeson, 86, passed away peacefully on Wednesday, May 3, 2017 at Beaumont Skilled Nursing Center in Northborough following a brief illness. He is survived by his beloved wife of 60 years, Aristea (Biskaduros) Georgeson; and their two sons, Michael N. Georgeson of Clinton; and Pastor Stephen N. Georgeson & wife Mish of Northborough; nephew Mark Georgeson of Clinton; several nieces, nephews and many dear friends. He is pre-deceased by his siblings, Charles, Sophie, and Georgia Georgeson.
Nick was born in Clinton to the late Michael & Rena Georgeson. He attended local schools and graduated from the Clinton High School, Class of 1949. Nick enlisted to proudly serve our nation in the United States Army during the Korean War. He was assigned to Company B, Tank Batallion and served his tour of duty in Germany before being honorably discharged as a Corporal and returning home safely. Nick, his brother Charles, and sister Sophie, successfully established, owned and operated their family business, Georgeson’s Market in Clinton, for many years until their retirement. Nick became famously known for his homemade club sandwiches and always greeted patrons with a smile. He held a lifelong passion for music and was a talented trumpet player with several area jazz and big band orchestras throughout his playing career. Nick and Aristea enjoyed many winters with friends in Port Charlotte, Florida. He was a life member of St. Nicholas Greek Orthodox Church in Clinton and will be forever remembered as a devoted husband, father, brother, uncle, and friend. A Funeral Service will be celebrated at 10AM on Monday, May 8, 2017 at St. Nicholas Greek Orthodox Church, 123 School St., Clinton. Burial will follow in Woodlawn Cemetery, Clinton. Calling hours will be held from 4 until 7PM on Sunday, May 7, 2017 in the Philbin-Comeau Funeral Home, 176 Water St., Clinton. Online condolences may be placed at www.philbincomeaufh.com