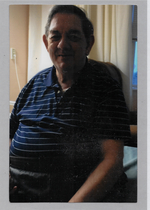 Clinton-Bert D. Ricker, 78, passed away peacefully at Sterling Village on Sunday, March 12, 2017. He is survived by his beloved wife of 55 years, Barbara (Gamarsh) Ricker; their children, Louise O’Connor of Clinton; Barbara Fusco & husband John of Bolton, VT; Dorothy Deitzel & husband David; and Bert J. Ricker, all of Clinton; siblings & their spouses, Terry Ricker & Sandra of Orange; Timothy Ricker & Jenny of Whitefield, NH; sisters-in-law, Mary Ricker of Littleton, NH; and Rose Ann Ricker of Clinton; 10 grandchildren, 3 great-grandchildren, several nieces, nephews, and many dear friends. He is pre-deceased by his parents Freeman O. Ricker and Mattie (Sweeney) Ricker Burns; three siblings; Franklin, Otis, and Ronald Ricker.
Bert was born and educated in West Stewardstown, NH. He later graduated from the Clinton High School and proudly served our nation in the US Army National Guard. Bert and his wife Barbara raised their family in Clinton, where he worked for more than 20 years with the Van Brode Company. He was later employed as an assistant manager for Cumberland Farms in Clinton before ultimately retiring. Bert was a devout member and long time usher at St. John the Guardian of Our Lady Parish in Clinton. He was a lifelong fan of car racing and NASCAR, and avid outdoorsman, hunter and fisherman. Bert was a talented cribbage and dominoes player, and was a sports enthusiast who enjoyed golfing and candlepin bowling. He will be dearly missed and remembered lovingly by his family and friends. Funeral Services are to be held on Thursday, March16, 2017 from the Philbin-Comeau Funeral Home, 176 Water St., Clinton, with a Mass of Christian Burial to be celebrated at 10AM in St. John the Evangelist Church, 80 Union St., Clinton. Burial will later be held in Woodlawn Cemetery, Clinton. Calling hours will be on Wednesday, March 15, 2017 from 5 until 7PM in the funeral home. Online condolences may be placed at www.philbincomeaufh.com