In Memory of
Frank Edward "Junnie"
Witkowski
1934 - 2017
Click above to light a memorial candle.
Memorial Candle Tribute From
Philbin-Comeau Funeral Home
"We are honored to provide this Book of Memories to the family."
View full message >>>
Send Flowers
Plant a Tree In Memory of Your Loved One
Click Here
Menu 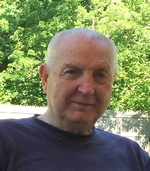 Fitchburg-Frank E. "Junnie" Witkowski, 82, passed away peacefully surrounded by his family at Leominster Hospital on Saturday, February 18, 2017 following a brief illness. He is survived by his loving children & their spouses, Elizabeth Reichert & Gordon of Gardner; Frank E. Witkowski & Brenda of Winchendon; and Lynn Horton & David of Templeton. He leaves his long time companion Jeanine Saunders, with whom he lived, of Fitchburg; his sister Maureen “Linda” O’Toole & Richard of Sterling; 8 grandchildren, 20 great-grandchildren, sister-in-law Joanne Witkowski of Clinton; brother-in-law John Agnitti of Berlin; numerous nieces, nephews, cousins, and dear friends. He is pre-deceased by his wife Elizabeth (Robinson) Witkowski, and his siblings, Paul Witkowski, Robert Witkowski, Arlene Hoffman, Patricia Wronski, Helen Mayou, and Barbara Agnitti.
Frank was born in Clinton to the late Frank & Helene (O’Rourke) Witkowski. He attended local schools before joining his family in business at Franks Auto Sales in Clinton. As a heavy equipment operator, he later established his own company, and for many years owned and operated Franks Trucking & Excavating in Berlin. Frank then went to work for Courier Printing in Westford, from where he ultimately retired after 15 years of employment. Proud of his Polish heritage, Junnie was a long standing member of the Polish American Veterans in Clinton. Frank was happiest when buying, selling, or auctioning his many treasured collectibles that he has accumulated throughout his lifetime. He will be dearly missed and forever remembered as a devoted husband, father, grandfather, brother, uncle, and friend. Funeral services will be held on Thursday, February 23, 2017 from the Philbin-Comeau Funeral Home, 176 Water St., Clinton, with a Mass of Christian Burial to be celebrated at 10AM in St. John the Evangelist Church, 80 Union St., Clinton. Burial will follow in St. John’s Cemetery, Lancaster. Calling hours will be held in the funeral home on Wednesday, February 22, 2017 from 5 until 8PM. Online condolences may be placed at www.philbincomeaufh.com