In Memory of
Sadie M.
Grady (Merriman)
1926 -
2017
Click above to light a memorial candle.
Menu
Send Flowers
Plant a Tree In Memory of Your Loved One
Click Here 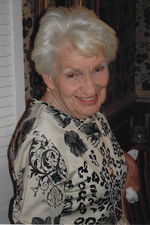 Clinton-Sadie M. (Merriman) Grady, 90, passed away peacefully in her residence in Fairfax, VA, on Wednesday, February 15, 2017, following a brief illness. She is preceded in death by her beloved husband of 44 years, John W. Grady. She is survived by her loving children and their spouses, Maureen Genser & Erick of McLean, VA; Peggy Furey & Gregory of Dudley; John R. Grady & Barbara of Dracut; and Sarah McMahon of Palmer. She leaves 10 grandchildren, Andrew Genser, Sarah Will, Kevin and Patrick Furey, John W., Ryan, and Timothy Grady, Matthew and Timothy McMahon, and Kerry Beaudoin, 8 great-grandchildren, sister-in-law Emma Merriman of Clinton; son-in-law Norman McMahon of Monson; generations of nieces, nephews, cousins, and many dear friends. She is pre-deceased by her brother John Merriman.
Sadie was born in Clinton to the late Arthur & Sarah (O’Malley) Merriman. She graduated from the Clinton High School, Class of 1944 and began her career as a telephone operator with New England Telephone. In addition to raising her family, Sadie worked as a waitress at the Old Timer Restaurant in Clinton, as an operator for the Third National Bank in Palmer and retired after many years from AT&T. A parishioner of St. John the Guardian of Our Lady in Clinton and St. Thomas the Apostle Parish in Palmer, Sadie was a member of the Holy Rosary Sodality and taught CCD for many years. Sadie was a former Troop Leader and active volunteer for the Girl Scouts in Clinton. She will be dearly missed and lovingly remembered as the strong, independent, matriarch of her family. Calling hours will be held on Tuesday, February 28, 2017 from 10 until 11AM in the Philbin-Comeau Funeral Home, 176 Water St., Clinton, with a Mass of Christian Burial to be celebrated at 11:30AM in St. John the Evangelist Church, 80 Union St., Clinton. Burial will follow in St. John’s Cemetery, Lancaster. Memorial contributions may be made in memory of Sadie M. Grady to: Alzheimer’s Association of MA, 480 Pleasant St., Watertown, MA 02472. Online condolences may be placed at www.philbincomeaufh.com