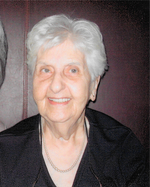 Clinton-Gloria V. (Palmieri) Domenico,93, passed away peacefully in her residence on Tuesday, January 31, 2017. She is preceded in death by her beloved husband of 57 years, Lawrence P. Domenico, who died in 2003. She is survived by her loving children, Lawrence J. Domenico of Clinton; and Jane F. Mitchell & husband Kevin of Greene, Maine; extended family and dear friends.
Gloria was born in Gardner, Massachusetts to Italian immigrants Sebastiano & Mary (Schiavone) Palmieri. She attended Sacred Heart Elementary School, graduated from Gardner High School, Class of 1941, and obtained her professional degree in secretarial studies. Gloria worked for the City of Gardner before coming to Clinton, where she spent her career as a secretary for the Clinton Water Department, Clinton Police Department and later Clinton Town Hall before retiring. She was a faithful member of St. John the Guardian of Our Lady Parish, the Holy Family League, and was a former Girl Scout Troop Leader. Gloria dedicated herself to her family and enjoyed the hobbies of knitting, reading and completing crossword puzzles. A Requiem Mass will be celebrated at 11AM on Tuesday, February 7, 2017 at St. Benedict Center, Immaculate Heart of Mary Chapel, 282 Still River Rd., Still River, with burial to follow in St. John’s Cemetery, Lancaster. A calling hour will be held prior to Mass on Tuesday morning from 9:30 until 10:30AM in the Philbin-Comeau Funeral Home, 176 Water St., Clinton. Memorial contributions may be made in memory of Gloria Domenico to: Saint Benedict Center, The Slaves of Immaculate Heart of Mary, PO Box 1000, Still River, MA 01467. Online condolences may be placed at www.philbincomeaufh.com