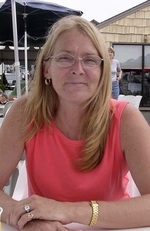 Sanger, CA-Patricia F. (Gardner) Fawcett, 64. Patti has gone to heaven after an epic battle with lung cancer. An amazing mother and fearless warrior, Patti died peacefully at home listening to James Taylor and holding her daughters' hands. Patti leaves behind her daughters, Ambra Fawcett Dorsey of California and Farrah (Fawcett) and her husband Lt. Col. Brian McCullough of Virginia. Patti was a loving grandmother of seven, and recently welcomed her first great grandchild to the world. She leaves behind her sister Judith Casasanto of Clinton, brother George Gardner of Holden and step mother Beverly Gardner all of Gloucester. She will be missed by a host of nieces, nephews and special friends including Shawn O'Connor who helped Ambra care for her in her final season. Patti was welcomed to heaven by her mother Mary (Kosinski), her father George, her sister Kathy and a ton of friends that went before her. There was certainly a party upon her arrival. Patti was born and raised in Clinton where she attended school (and gave the nuns a hard time) at Our Lady of the Holy Rosary. She was a 1969 graduate of Clinton High School. Shortly thereafter, she met and married George and they remained close friends until her final days. Patti spent most of her life as a small business owner and retired from the IRS in 2007 at the onset of her illness. While fighting cancer, she traveled through Europe and went on many road trips across the U.S. When she wasn't busy with her grandkids, she enjoyed gardening, slot machines, animals and baking. Patti had bright blue eyes, a charitable spirit and a heart of gold. She will be deeply missed by all that knew her and followed her journey. A funeral mass will be celebrated at 10AM on Saturday, February 11, 2017 in St. John the Evangelist Church, 80 Union St., Clinton, with burial to follow in St. John’s Cemetery, Lancaster. In lieu of flowers, please consider a contribution to Hinds Hospice in Fresno, CA or Breast Intentions of Massachusetts. Funeral arrangements are entrusted to the care of Philbin-Comeau Funeral Home, 176 Water St., Clinton. Online condolences may be placed at www.philbincomeaufh.com