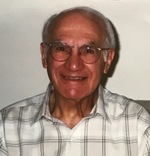 Clinton-Albert J. Iacobucci, 91, passed away peacefully on Thursday, December 22, 2016 at Jewish Healthcare Center in Worcester following a brief illness. He is survived by his beloved wife of 61 years, Rita (Lizak) Iacobucci; their children and spouses, Mark D. Iacobucci & Eileen of Palm Harbor, FL; Paul A. Iacobucci & Rosemary of St. Charles, IL; and Ann Schurhammer & Jerry of Brewster, NY; 6 grandchildren, Vincent, Veronica, Mikaela, Angelica, Alexandra, and Thomas Iacobucci. He leaves two brothers, Adam Iacobucci & wife Rose of Hudson; John “Jack” Iacobucci & wife Maryann of GA; sister-in-law Madeline Iacobucci, wife of the late Dr. Alfred P. Iacobucci, of Shrewsbury, several nieces, nephews, cousins, and many dear friends.
Albert was born in Clinton to the late Giovanni & Rose (DiNicola) Iacobucci. He graduated from the Clinton High School, Class of 1943, and enlisted to proudly serve our nation in the United States Army during WWII. He was assigned to the 7031st Military Division as an ambulance driver at Walter Reed Naval Hospital in Bethesda, MD, and returned home from service to obtain his degree in Psychology from Clark University. Al and his loving wife Rita married in 1955 and the couple settled on Stone Street in Clinton where they raised their family and resided for the last 60 years. Al was employed as an accountant in the wire & cable industry, working first at Fort Devens, later for Rex-Corp in Acton, ITT Surprenant, and ultimately retiring from Astro Wire & Cable in Worcester. He was a member of St. John the Guardian of Our Lady Parish in Clinton where he was an active volunteer for the annual Bishop’s Fund. Al served as a corporator for Clinton Savings Bank and held membership with the American Legion. A dedicated sports fan, Al became a Patriots season ticket holder upon the team’s arrival to Foxboro; he cheered for the Boston Braves and loved Holy Cross basketball. He was a talented mechanic who enjoyed working on cars, he took pleasure in traveling, playing golf and time spent in the company of his family. Funeral Services are to be held on Tuesday, December 27, 2016 from the Philbin-Comeau Funeral Home, 176 Water St., Clinton, with a Mass of Christian Burial to be celebrated at 11:30AM in St. John the Guardian of Our Lady Parish, 80 Union St., Clinton. Burial will follow in St. John’s Cemetery, Lancaster. Calling hours will be held from 5 until 7PM on Monday, December 26, 2016. Memorial contributions may be made in memory of Albert Iacobucci to: American Cancer Society, 44 Nagog Park, Suite 100, Acton, MA 01720. Online condolences may be placed at www.philbincomeaufh.com